The San Antonio Neighborhood Improvements Bond Committee voted Thursday, Dec. 8, to recommend 13 distressed areas for inclusion in what would be the city's first affordable housing bond project. The recommendations are part of a five-category, $850 million total bond issue the city plans to put before voters May 6.

The committee agreed by an overwhelming 22-4 vote to forward the recommendations to the San Antonio City Council. But some committee members voiced concern that residents do not know enough about the so-called housing bond. After a last-minute addition of the controversial Oak Hollow Mobile Home Park area, committee members also worried - despite the city's pledge to the contrary - that residents could be displaced and property could be taken by eminent domain under the program.

The San Antonio City Charter precludes issuing general obligation bonds for housing. In this case, the city  proposes using up to $20 million in voter-approved bond funds for the local urban renewal agency, OUR SA, to buy distressed property in 13 areas of the city and prepare it for redevelopment. The money could be used to tear down dilapidated structures, address environmental issues and provide or improve infrastructure.

Viewers can watch the entire bond meeting below:

The property would then be sold for mixed-income housing, mixed-use development and/or affordable housing. This is the first time San Antonio is using a bond issue to encourage affordable housing, which local leaders see as much-needed, with more than 1.1 million more people expected to move to the area by 2040.

The recommended areas are: the Five Points neighborhood and near West Side; the near East Side; Lincoln Park-Arena District on the East Side; East Southcross; Southeast Side; Roosevelt/Mission Reach; South Park; Pearsall Road; West Side; Edgewood; Wurzbach Road; Culebra and Callaghan roads; and Oak Hollow.

The committee in November voted to remove four other areas from consideration: Former fire academy site on the West Side; Interstate 10/Loop 410; Blanco Road and West Avenue; and Naco Perrin. Those areas will be included in an urban renewal plan. (This link includes maps to the original and final areas.)

In October, the city told residents in 12 units in the Oak Hollow Mobile Home Park to evacucate temporarily due to unhealthy, unsanitary conditions. Some residents had complained about leaking raw sewage.

The property owner then sent a letter to all park residents, saying the city had condemned the entire property and wanted it vacated. At the time, District 8 City Councilman Ron Nirenberg said the property owner made a false claim and no such order was made.

At the final bond committee meeting, city officials insisted it is up to the property owner to remedy the sewage problem at the mobile home park. A few committee members said Oak Hollow would be a prime opportunity to provide a space for affordable housing in an area that lies between the South Texas Medical Center and the University of Texas at San Antonio.

But others were more skeptical. District 6 member Dominick Dina called it a "sticky issue" that may lend itself and the overal bond to negative coverage prior to the May election. Dina also criticized Nirenberg, saying the councilman did not do enough in preceding weeks to address problems at Oak Hollow and "slipped something under the 11th hour," referring to the last-minute recommendation.

District 6 member Bill McDonough agreed, worrying there is a perception that eminent domain could be used at Oak Hollow and current residents would be displaced.

Member Lauro DeLeon, also of District 6, said if Oak Hollow were tacked onto the bond, voters would not have their say until May. Even in the case of approval, remediation may not come to the mobile home park property for a long time, and it's anyone's guess as to whether a developer would acquire the property afterward. DeLeon said residents need help sooner than later.

"Putting an area into this plan doesn't mean a project will go in there. It's too early (for that speculation)," said committee Co-Chair Jackie Gorman.

From there, Gorman and some members worried whether they had enough time to fully comprehend the city's mission in faciltating affordbable housing through the new "neighborhood improvements" bond category. Several committee representatives attended two meetings with local neighborhood association members in late November, informing them of the housing bond efforts. Many of those representatives acknowledged they had a tough time describing the proposed program.

"If we can't understand it here, how the heck are we going to explain it to the citizens?" Gorman said.

District 10 representative Ricardo Jimenez agreed that residents could be confused by the housing part of the bond, even given its "neighborhood improvements" label.

"People are a little misguided about the purpose," Jimenez added.

"We still have a lot of questions," District 9 member Colleen Waguespack said, adding that many residents have not provided input on this part of the overall bond package.

Some members even suggested tabling the item and returning it all to the council, but others said they would rather make a final recommendation on schedule.

The committee went on to vote 22-4 in favor of recommending the 13 areas, including Oak Hollow. Based on two surveys, committee members ranked Near West Side/Five Points, Lincoln Park/Arena District, West Side, Near East and Edgewood as being top priorities. Most members offered final thoughts before voting on the package.

"Thank you for your work. You're creating something that has never existed," said Tom Heger, District 1 representative.

"The demand for affordable housing is staggering," District 7 representative Michael Taylor said. "It's paramount we do something now."

Dina suggested a citizens' committee be appointed to oversee how the urban renewal plan is implemented and how housing bond funds are used. Dina's idea echoes that of a team of residents making their own bond-related recommendations to COPS/Metro Alliance. That organization is determining how to address the overall bond campaign. Dina said public input is essential.

"We're all paying for it. We live in the city," he said. "We should have a little skin in the game."

District 8 representative Chris Laia concurred: "We have to include the community early and often."

The city council will review the Neighborhood Improvements Committee's recommendations during B session at 2 p.m. Wednesday, Dec. 14, at the Municipal Plaza Building. The next day in A session, the council is slated to formally authorize areas for the renewal plan.

The council will host a public hearing on the recommended areas on Jan. 18. The council is expected to adopt the renewal plan on Feb. 2. The following week, the council is to call for the bond election, which will coincide with the council elections in May. 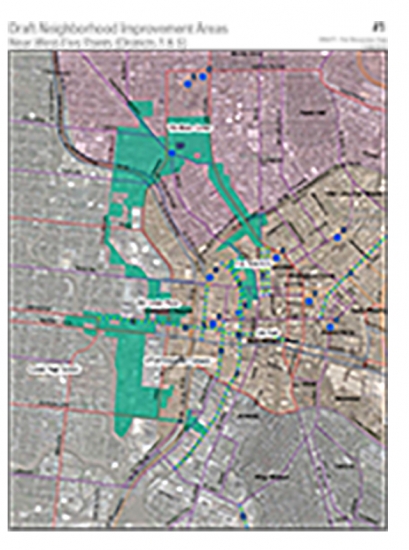