Carrizo Springs, TX -- Dimmit County Commissioners rejected a proposal from Stratton Oilfield Systems that would have turned a former “Man Camp” into a privately operated detention facility similar to those in Karnes and Dilley which are used by Immigration and Customs Enforcement to detain asylum-seeking mothers and children.

After heated opposition and even heckling from Dimmit residents and refugee advocates, Dimmit County Commissioners unanimously turned down the proposal, becoming the second Texas county in June to reject a federal family detention center.

The Guardian reported last week that federal immigration officials were moving forward with plans for a new 500-bed family detention center to house migrant women and children, even as many advocates and politicians have called for the closure of such facilities altogether.

According to this YouTube video of the event, after Stratton gave his presentation to the Dimmit County Commissioners, dozens of residents lined up to speak out against Stratton’s proposal, rebuking him for his characterization of the detention center.

The Corpus Christi Caller Times reported that Jim Wells County officials rejected turning a closed nursing home into a detention center earlier in June after a public backlash and a plea from a Catholic Bishop. The Caller Times said: “Bishop Michael Mulvey, who leads the Diocese of Corpus Christi, issued a statement before the hearing urging county officials to reconsider allowing Serco to operate the facility, saying its existence goes against human decency.” 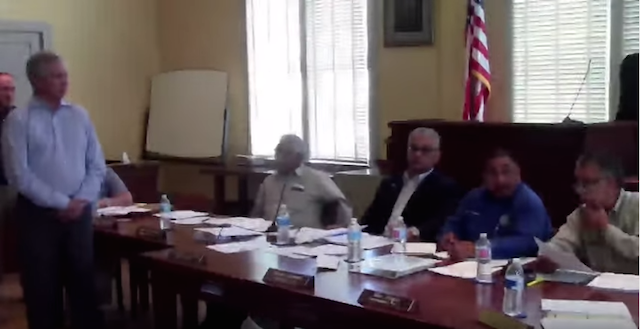