Video: Dusk at the Alamo, a Remembrance of the Last Defenders

Just outside the historic steps of the Alamo, the light begins to fall and dusk begins to take form. It is March 6 and the flag outside hangs at half-mast.

Wreaths for Colonel William Travis and others outline the grassy area in front of the chapel. And although the famous battle ended 181 years ago today, and although the half-mast flag is for the late former Supreme Court Chief Justice Andrew Jackson “Jack” Pope, Jr. (a descendant of a hero of the Battle of San Jacinto), the reverence for the Alamo defenders still hangs in the breeze.

Dr. Bruce Winders, curator and historian at the Alamo, introduced a brief ceremony in front of the Alamo church to commemorate the lighting of the funeral pyres, ordered by Santa Anna after the famous battle.

“This is the sixth ceremony we’ve had at dusk,” Winders said. “We had a dawn ceremony commemorating the anniversary for many years but we didn’t have a way to provide closure.”

He spoke of Santa Anna’s order for the bodies of the defenders to be burned.

View a photo gallery of the ceremony below. 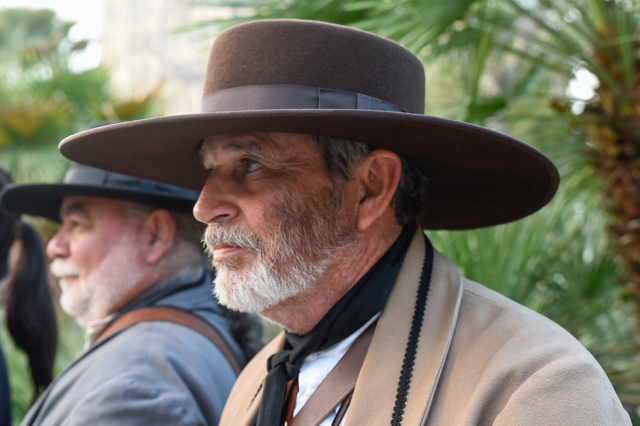 “The word ‘bonfire’ may come from the ‘bone fire,’” he said. “The large number of bodies after the battle created a public health hazard.”

Francisco Antonio Ruiz was the mayor of San Antonio in 1836 and prepared a statement about the fall of the Alamo. Winders referenced Ruiz’ remarks.

“About 3 o'clock in the afternoon of the next day they (the Mexican soldiers) commenced laying wood and dry branches upon which a file of dead bodies were placed, more wood was piled on them and another file brought, and in this manner all were arranged in layers,” Ruiz wrote. “Kindling wood was distributed through the pile and at 8 o'clock it was lighted.”

Winders said there were three bonfires – and quoted the details provided by Ruiz.

"The men burned numbered 182,” Ruiz wrote. “I was an eye witness, for as Alcalde of San Antonio, I was with some of the neighbors collecting the dead bodies and placing them on the funeral pyre.”

Winders said only one of the defenders, Gregorio Esparza, escaped the bonfire.

“He received a Christian burial because his body was recognized by his brother Francisco, a soldier in Santa Anna's army,” Winders said. “Gregorio was buried in the San Fernando cemetery.”

Though many believe the remains of the Alamo defenders rest in the church at San Fernando Cathedral, a marker at an Eastside cemetery tells us this:

"August Beisenbach, city clerk of San Antonio states that when he was an 8 year old boy playing on the Alameda (Commerce St.) he witnessed the exhuming of bodies or remains consisting of bones and fragments of bones, of victims of the siege of the Alamo that had been interred near the place where the bodies had been burned and originally buried, and saw their transfers from that place to the old cemetery, on Powder House Hill (Oddfellows Cemetery) this, he states happened in 1856. The fragments of the bodies had first been buried in 1836 and some in 1837. Mr. Beisenbach states that these bodies are buried midway between the monuments of Capt. R.A. Gillespe and Capt. Samuel H. Walker."

View a brief video of the ceremony at the Alamo below.

Colonel Juan N. Seguin, had a different account. The words of Colonel Seguin, Commandant of San Antonio, were read in Spanish by Ernesto Rodriguez (a reenactor of historical events) and in English by William Chemerka (founder of the Alamo Society and author several books on Texas history) at the dusk ceremony.

"Companions in Arms!! These remains which we have the honor of carrying on our shoulders are those of the valiant heroes who died in the Alamo. Yes, my friends, they preferred to die a thousand times rather than submit themselves to the tyrant's yoke. What a brilliant example! Deserving of being noted in the pages of history. The spirit of liberty appears to be looking out from its elevated throne with its pleasing mien and point to us saying: ‘There are your brothers, Travis, Bowie, Crockett, and others whose valor places them in the rank of my heroes.’

“Yes soldiers and fellow citizens, these are the worthy beings who, by the twists of fate, during the present campaign delivered their bodies to the ferocity of their enemies; who, barbarously treated as beasts, were bound by their feet and dragged to this spot, where they were reduced to ashes. The venerable remains of our worth companions as witnesses, I invite you to declare to the entire world, ‘Texas shall be free and independent or we shall perish in glorious combat.," Colonel Seguin said.

As we recall the words of Colonel Seguin, we remember the Alamo.

Heroes of the Alamo – by Don Mathis

Here's to the memory of the Alamo,
a story that everyone should know.
They fought and died just because
they believed they had a just cause.
William Travis died first.
The other's deaths were much worse.
Sick in bed was old Jim.
His friend died protecting him.
Davy Crockett was not alone.
His name is carved in the stone.
Esparza fought at the Alamo and died,
his brother was on Santa Anna's side.
Each had a chance to run away
but they fought, and so today,
We remember they did not go
and we remember the Alamo.

**Cover Image: On the evening of March 6, 2017, a brief ceremony took place in front of the Alamo church to commemorate the lighting of the funeral pyres for the lost defenders of the Alamo. Photo by Drew Patterson. 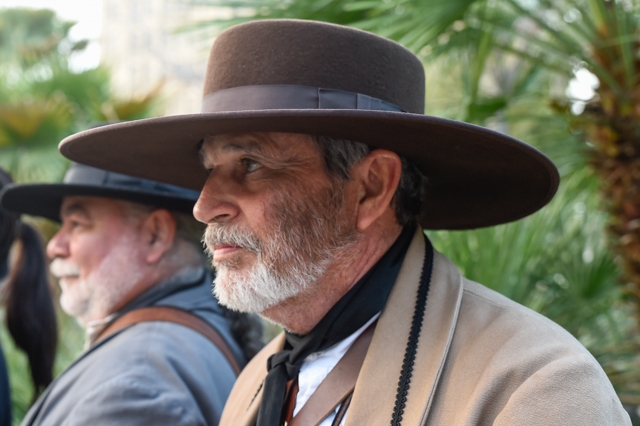