Catch up and get ahead with the edge for the week of February 29!

The Primary Election and Super Tuesday

Super Tuesday, March 1 is a big deal. We’ll see Democrats and Republicans make presidential preference choices in 11 states including Texas. More presidential delegates are up for grabs on March 1 than any other single day in the primary.

Already in Early Voting, 48,638 Democrats and 57,290 Republicans have cast ballots, according to the Bexar County Elections office.

If you plan to vote on Tuesday, make sure to check out our nonpartisan, bilingual voter guide with information about the dozens of races on the ballot. It's free!

Then make sure you get a free ride from VIA Metro Transit on Election day.  Just show your voter registration card and hop on board -- and go VOTE!!

State of District 8 and the future of transportation

In his State of District 8 speech, Councilman Ron Nirenberg mapped out his ideas for the city’s future. (See our story and videos here.)

Nirenberg got the most enthusiastic applause when he called for a conversation and vote on commuter rail in San Antonio. “We need a rail debate. We need a rail vote & we need it next May," he said.

Thanks to underwriting support from Security Service Federal Credit Union and Councilman Nirenberg, you can replay the video here:

Panelists at the event took part in a lively conversation about transportation that included views on bicycle and pedestrian mobility, highways, mass transit and the greenway trail system. You can replay that video here.

A bridge over busy highways

also reiterated his support for a land bridge in Hardberger Park where the meeting was held.

Hardberger park is currently separated into two parts by the Wurzbach Parkway. According to the park's Master Plan, the ideal way to connect the two sides is to build a bridge broad enough for animals and people to safely cross.

This Land Bridge would be 100 yards wide and could cost as much as $20 million to build.

Check out NOWCastSA’s video of land bridges around the world and what San Antonio’s might look like.

You can learn a lot about African American Social Welfare Pioneers from our recent webcast of a presentation by Dr. Iris Carlton-LaNey, a professor at the University of North Carolina Chapel Hill.

Thanks to underwriting support from the UTSA College of Public Policy, you can replay this Dean’s Distinguished Lecture anytime for free, right here,

Dr. Carlton-LaNey’s talk touched on the important contributions of some famous people and some who were ordinary people who made extraordinary differences in other people’s lives.

Thanks for watching the Edge, see you next time! 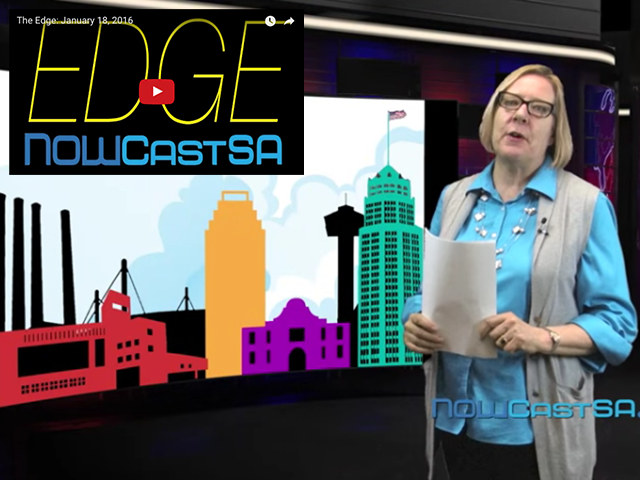