Catch up and get ahead with news about: fingerprinting Uber and Lyft, San Antonio's ozone problem, the legacy of Henry B Gonzalez and C.O.P.S./Metro Alliance's birthday and living wage campaign.

Austin residents proved that money can't buy you love, voting 56 to 44 percent to resoundingly reject Proposition 1 and to keep the requirement that drivers for ride-hailing companies to pass ten-fingerprint background checks.

Lyft and Uber spent $8 million campaigning for Prop 1, according to this article on KUT, Austin's public radio station, that's 8 times as much as has ever been spent in a local Austin election.

Uber and Lyft said they’d leave town rather than comply with the regs, but according to an article in the Texas Tribune, a new company Get Me LLC, also known as getme, is ready to fill the gap and has no problem complying  local regulation including fingerprint background checks. Click here for the rest of the story!

That’s only a problem if you breathe.
San Antonio has unhealthy levels of ozone that could cause premature death, asthma attacks and heart disease, according to the American Lung Association’s just-released “State of the Air” report.

Councilman Ron Nirenberg says San Antonio should get moving to clean up the air after flunking the ozone test.

He’s looking ahead to a new city ordinance that would stop big trucks from idling their engines more than 5 minutes. Click here for more on the story!

This month would be the 100th birthday of the former Congressman who was so beloved that most San Antonians referred to him simply as Henry B.

We at NOWCastSA livestreamed the day-long celebration of Gonzalez’ Centennial, that included many stories of his legacy and impact.

At the heart of it all, was Henry B. Gonzalez’ relationship with the people he served. Click here to see the story and videos.

About 1,000 C.O.P.S/Metro Alliance members gathered at Edison High School to honor their leaders and celebrate 40 years of change while pushing forward with

their campaign to have public sector workers be paid a living wage. 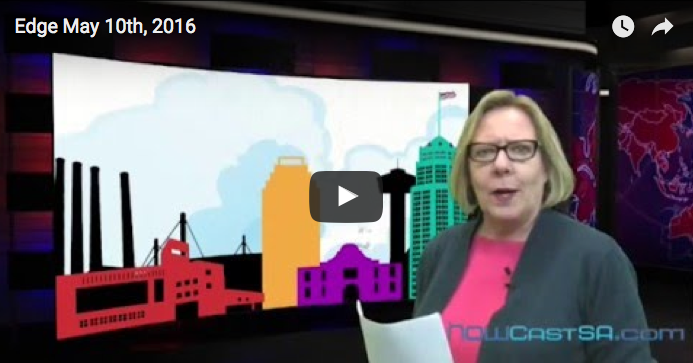