Catch up and get ahead with news about School Finance, Kids Count, La Semana del Niño Parent Institute and Pinwheels for Change.

In a May 13 ruling, the Texas Supreme Court upheld the state’s public school funding system as constitutional, rejecting arguments from more than 500 school districts, parents, students and others who said the system fails to ensure a quality education for all students.

In its 100-page ruling, the Court urged --  but did not require -- the Legislature to implement "transformational, top-to-bottom reforms that amount to more than Band-Aid on top of Band-Aid."

Without a court order telling the Legislature what to do, many school groups worry that lawmakers may do nothing at all. Click here to view the story.

What’s the state of Texas Children? The Center For Public Policy Priorities issued its annual “Kids Count” report, showing that the 7 million kids in Texas rank 41st in the nation in child well-being.
In part, that’s because one in four Texas children live in poverty.
In the San Antonio area, past discriminatory practices still haunt the present.

In the 1930s, 65,000 Latino families lived in a four-square-mile area on the West side known as the “Mexican Quarter,” while black families were restricted to a few neighborhoods on the East side. There were separate schools for Whites, Latino and Black students.

Those policies are no longer legal, but the effects linger on, with Latino and Black children nearly three times more likely to live in poverty than white children. Click Here To See The Story.

So why was one of the city’s largest business organizations - the Hispanic Chamber of Commerce - there? Click Here To See The Story.

Seventeen local artists were asked to design unique pinwheels as part of 1 in 5 Minds, a campaign to eradicate stigma and raise awareness about children’s mental health.

The pinwheels were unveiled at San Antonio’s Central Library at the beginning of May, which is Mental Health Awareness Month, before going on display at locations throughout the city.

Later, the pinwheels will be auctioned off with proceeds benefiting Clarity Child Guidance Center, a nonprofit mental health treatment center for children.

One in five children struggle with mental illness. Watch artist Rex Hausmann as he describes the significance of a pinwheel and his well as expressing his hopes for this project. Click Here To See The Story. 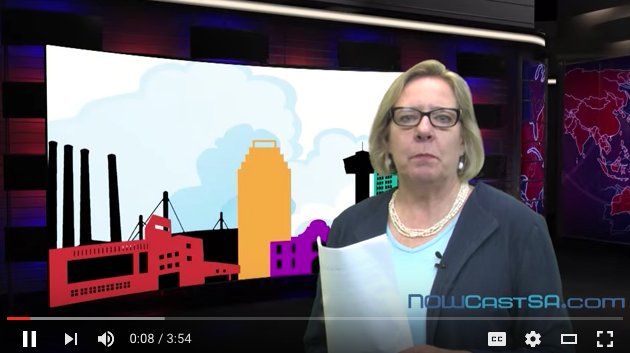