Ernesto Olivo was among more than 60 people from San Antonio who went to Phoenix in a caravan to participate in the National Day of Action march, protesting Arizona's new law that calls for police to use "reasonable suspicion" to question and detain possible undocumented immigrants.

Thousands of people joined the march in Phoenix, while others held smaller, symbolic rallies in other cities, including San Antonio. (Here is video of local protesters explaining their concerns.)

During the Phoenix march, Olivo published several photos of the event to the Web, via Twitter. With his permission, NOWCastSA gathered the pictures in a slideshow below.

"(This) was an amazing and energetic protest march," Olivo said via Twitter Saturday afternoon.  "Being a part of this was a true experience to the big picture of immigration issues in this country." (Follow him on Twitter @ernestolivo)

Here is his slideshow:

In support of the local group in Phoenix, here in San Antonio the same day, about 20 participants protested in front of City Hall. View a slideshow of those photos here. 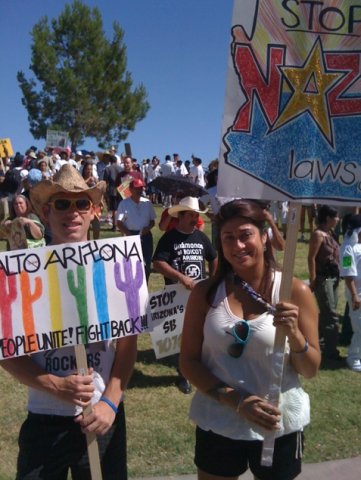