Esperanza Center for Peace and Justice is marking its 30th anniversary throughout 2017.

But for individuals who have long been associated with the nonprofit, such as director Graciela Sanchez, Esperanza is not standing idly by, celebrating with a few special events.

Sanchez. other staff members, volunteers and supporters of the Esperanza have plenty to do, addressing a variety of local and global issues, like they always have.

The center was created by a group of mostly Chicana activists, who sought a space to help rally movements around issues related to peace and social justice.

"We started off because we responding to both national Reagan policies, which were in their sixth or seventh year and had been devastating, and how do we respond in a larger, more organized way against the wars in Central America, on behalf of LGBT rights and women’s rights?” explained Sanchez, the center’s third-ever director. 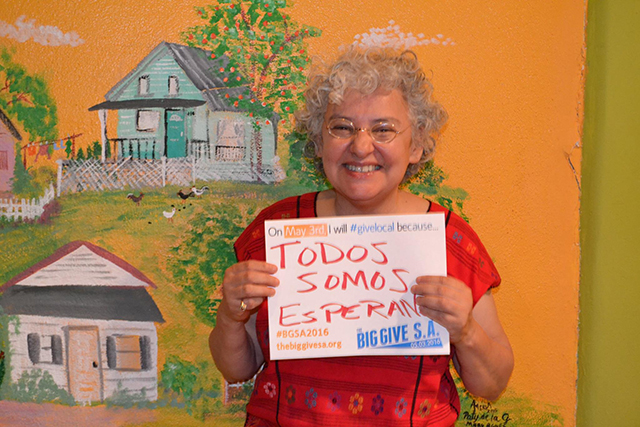 "The language then was so similar to messages on Saturday,” Sanchez added, referring to the millions of people taking part in the women’s marches in Washington, D.C., San Antonio and elsewhere on Jan. 21.

Sanchez noted that, in the late 1980s as the Reagan era drew to a close, many San Antonians became concerned about the city’s reliance on its “Military City, USA” status while the United States backed wars across Central America.

"Our city leaders were excited by supporting wars because that’s how our middle-class Latinos and African-Americans survived,” she said.

“That was the industry and many of us wondered do we really want an industry that’s all about war when we’d rather have our tax dollars spent on health care, education, culture, things that make for a more loving, respectful culture.”

Sanchez said, simply, Esperanza Center started off as a space where all sorts of ideas that San Antonians had about their community, their country, their world, could be exchanged.

"Everybody was coming together to cross-pollinate ideas,” she added.

Over 30 years, Esperanza has been an intregral part in San Antonio’s community organizing landscape. The center brought up issues controversial for their time.

The organization made people think and take notice when it took part in demonstrations against racism, and efforts to encourage children to explore their artistic side.

It organized the first art exhibit in Texas to show how the AIDS crisis was affecting the gay community.

The center also took political hits, from local power brokers and even from the city government itself, as it was defunded.

Gloria Ramirez, who edits the center’s newsjournal, La Voz de Esperanza, is a native Austinite who found her true calling in San Antonio and at the center. She’s been involved with Esperanza since its creation.

Since 1977, she has called San Antonio home. A retired bilingual early childhood educator, Ramirez was active in the anti-war and Chicanx movement while studying at the University of Texas at Austin in the late 1960s and early ‘70s.

Ramirez admitted she felt more at home in San Antonio with its diverse population and the timing was right.

"All these issues were coming together,” she added.

Sanchez described the leadership as “Latinas for the most part, but working in concert with black women, Asian women.”

But, of course, the center has become many things to many San Antonians — an organization that advocates for the working class and impoverished, social progress, female empowerment and those who feel they have no voice.

The Esperanza also found made strides alongside the LGBT community. Sanchez recalled that even in the late ‘80s and early ‘90s, openly discussing issues near and dear to local gays and lesbians was not exactly kosher. Even groups that identified with addressing purely Latino issues had not fully embraced the LGBT community.

"We were putting out an agenda that everybody else was kind of afraid to do,” she said.

"I was pretty much the only out gay/lesbian person in the city back then, and we didn’t talk transgendered. To say we were cool with LGBT issues at the time was a major no-no even though other community organizations supported us, especially civil rights groups, we were the 'other'.”

Early on, however, the Esperanza’s ability to do co-sponsorships with local groups such as the Guadalupe Cultural Arts Center, Centro Cultural Aztlan and Jump-Start Performance Co. gave it the experience and, more importantly, the reputation for being able to bolster its power of networking and to “umbrella” other grassroots groups and causes.

This included helping the LGBT community to more efficiently organize its issues and events.

The Esperanza facilitated past LGBT groups such as San Antonio Lesbian and Gay Association. It sponsored landmark events such as the Texas Lesbian Conference, and the Out at the Movies and Other Out and Beyond film festivals.

In time, Esperanza used these skill sets to rally and organize on other issues, such as opposition to the first Gulf War and to the North American Free Trade Agreement.

The Esperanza helped Fuerza Unida, an organization whose creation followed Levi Strauss’ decision to close its Southwest Side factory. The move left more than 1,100 workers without jobs.

"We could talk about the effects of the free trade agreement by saying, ah yes, this community is a perfect example where 1,000 workers are going to lose their jobs,” Sanchez recalled.

As it went further into the ‘90s, the Esperanza grew in its outreach. But so did political pushback, especially when it came to more sensitive topics.

In 1997, the city - urged by local conservative groups - stopped funding the Esperanza and two of its initiatives, San Antonio Lesbian and Gay Media Project and VAN. The center and its allies sustained attacks in newspapers and over the radio airwaves.

A trial followed in 2000. Judge Orlando Garcia made a ruling in 2001, as he found that the city had violated the Esperanza’s rights.

After negotiations, the city agreed to monetary damages and pledged to respect the rights of applicants for local arts and cultural funding.

The case set a national precedent; it was the first to address the tender connection between public arts funding and race and ethnicity. 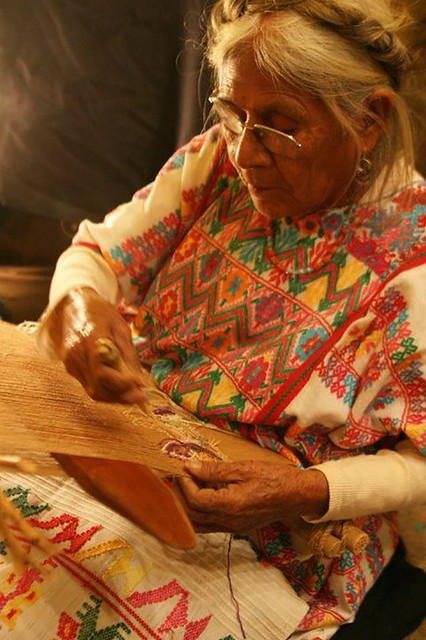 The Esperanza, its legal representatives and backers had argued that the defunding threatened the city’s support for cultural expression in the local Latino, African-American and indigenous communities.

It took a lot of time and effort, but the Esperanza has recovered from the defunding drama. With a $750,000 budget, the center continues its mission, embracing more “voiceless communities,” and combatting new challenges in the 21st century.

The center co-organizes the Las Calles No Se Callan free speech campaign as a result from the city’s action, in 2007, which charges groups thousands of dollars for a permit to march on city streets. The fee is waived only if the city decides it supports the march’s goal and message by sponsoring it.

The Esperanza has backed the Hays Street Bridge restoration campaign, and has rallied against the Vista Ridge water supply project, which the center says will harm low-income residents through higher water usage rates.

The Esperanza also continues to reach out to all generations. The center’s mission has not been lost on the millennial generation or its sense of activism.

Gianna Rendon, outreach and intern coordinator, joined the Esperanza in 2015 as an intern. Her interest in working with the center was piqued by a visit to the Esperanza’s Peace Market, a holiday shopping event held every Thanksgiving weekend.

Artisans and small business owners sell handmade jewelry, clothes, accessories, fair trade products and other items at the center’s office, which has operated at 922 San Pedro Ave. since 1994

"It was an amazing place because it was an alternative to Black Friday,” Rendon recalled. “It was more than about shopping, there was a whole community there. It just feels like a family.”

Rendon said the Esperanza allows her and her colleagues the flexibility to organize around a range of issues.

"Here, it is intersectional, I don’t have to choose,” she said. “Yes I am interested in environmental justice, LGBT rights, women’s right to choose. Here, you can do everything.”

She acknowledges that many young people don’t know about Esperanza - there is that piece of missing local history for them.

“Young people are trying to create their own organizations without knowing there’s a place like that already and it’s this,” she said.

“I hope people can find us soon. There are people in their 50s and 60s who come by here and say, wow, I didn’t know this existed, I wish I had come by sooner.”

Sanchez and Ramirez said much social progress has been gained since 1987, but that there’s plenty of issues to keep the Esperanza engaged, as the center continues to think globally and act locally.

Sanchez points to growing concerns over strained police/community relations, on a nationwide scale, as well as American involvement in wars abroad.

“There has been a challenge to power, and misuse of power. Our police forces have become militarized in a way we didn’t see 30 years ago,” she said. “Communities have tanks now. These are all scary things.”

The center has always fought against gentrification and for affordable housing, two issues that are garnering more attention in San Antonio with the city experiencing a growing population and an influx in urban core redevelopment. 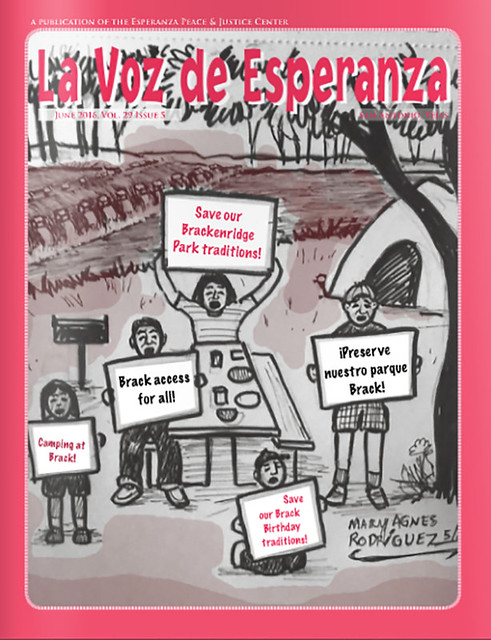 Sanchez expressed fear that what is happening on the city’s East Side, with infill and mixed-income housing arising, will fully come to pass soon on the West Side.

“The beauty of the West Side is that those folks have there historically,” she added.

Rendon said there is increasing concern, in the community, over the proposed affordable housing bond part of the city’s planned $850 million bond issue, which voters will consider May 6.

Rendon explained that the city’s selection of specific blighted properties for the housing bond appears to be flawed. The local organization COPS/Metro Alliance, also, has voiced worries over the housing bond.

"Hey, there are a lot of houses here, not many empty spaces,” she said, referring to targeted areas on the East and West sides. “It seems like (the city) didn’t really ask anyone who lived in that area. (The new housing)…is it really for people who need it or for people they want to bring in?”

"The housing bond is in there because 300 folks got pushed out of Mission Trails,” Sanchez said, referencing the closure of the Southside mobile home park, where a new apartment complex will go up.

Sanchez added with the city’s spiraling growth, including planned annexation, she’s worried that many will arrive in San Antonio unable to afford to live in the city long-term.

"We’re creating homeless just by wanting to bring more folks into the city. That’s not what our policy should be,” she added.

The Esperanza also advocates community preservation, which can go hand-in-hand with the fight against gentrification, Ramirez said.

"Two aspects of preservation would be preserving actual buildings and sites in a neighborhood, and preserving the culture and tradition,” she said.

As the Esperanza plans out its anniversary activities, the people who work and volunteer there look forward to new ways to organize toward peace and justice. But they are not forgetting the activists, the scholars, the movements that inspired them and the center.

"We get our analyses from people like Audra Lorde and Gloria Anzaldua,” Sanchez said. “Their analyses helped create the Esperanza, we put their words to action. We just build on it.” 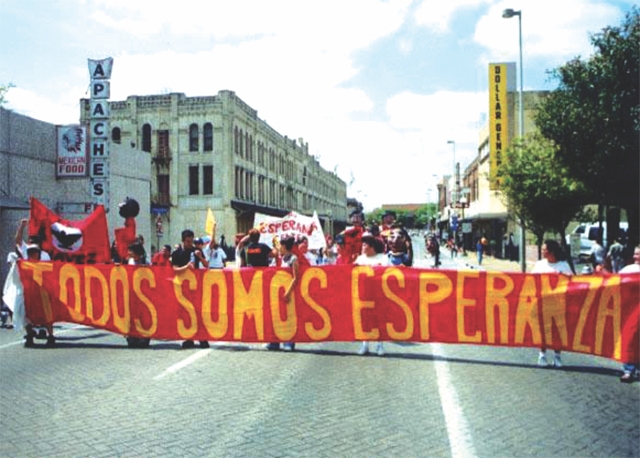