Join us as we march in the streets in solidarity with women and social justice movements in San Antonio and around the world.

The planning committee is actively reaching out to women in Austin, Dallas, Corpus Christi, Houston, and throughout South Texas to participate in the march. Organizers expect the number of marchers to exceed last year’s count of 3,000.

The International Woman’s Day March in San Antonio, unlike any other in the U.S. has historically addressed a wide range of issues, from violence against women and reproductive rights to development over the Edwards Aquifer, from immigration to war and occupation. By bringing together diverse groups of women, including transgender and genderqueer people, the march helps to build understanding of interconnected issues and their effects on women and girls.

The theme for this year’s march, “Sin Fronteras, Mujeres Marcharán Por Paz, Justicia y Solidaridad” (Without Borders, Women Will March For Peace, Justice and Solidarity) draws attention to the issue of migration and U.S. immigration policy, as well as the issue of violence – including domestic violence, police brutality and U.S. wars in Afghanistan and Iraq.

With laws similar to Arizona’s SB1070 possible in the Texas legislature in 2011, the march will also build on the passionate organizing done in San Antonio and throughout the country around immigration this year – from demonstrations of solidarity with the people of Arizona, to the UTSA hunger strikers and their community supporters advocating for the DREAM ACT.

The San Antonio International Woman's Day March Committee, along with the San Antonio Free Speech Coalition, will also continue to speak out against the repressive 2007 Marching and Parade Ordinance, which imposes high fees for political marches and cultural processions in public streets, limiting the right to freedom of speech and access to public spaces in San Antonio.

For more information or to find out how to get involved in this year’s International Woman’s Day March, call (210) 228-0201. 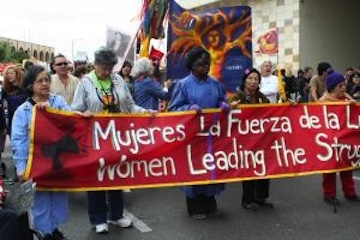