As Iran threatens to erase Israel from the map through possible nuclear annihilation and anti-Semitic attitudes persist throughout the world, should society be concerned? Edward Westermann, distinguished scholar in residence at the Holocaust Memorial Museum, believes so. He will address these issues and more during a lecture, “Confronting Hatred: Implications of the Holocaust for Contemporary Society” at 3 p.m. Sunday, April 15 at Congregation Agudas Achim, 16550 Huebner Road. Admission is free and open to the public.

Sponsored by the Holocaust Memorial Museum, Westermann will examine the role the Holocaust has played as a symbol of humanity after World War II, and the result of genocide as it occurred in Germany and in other post-World War II countries, such as the current killing of more than 400,000 people in Darfur, Sudan.

“I’ll also discuss the implications of the use of anti-Semitic rhetoric in the cases of Iran and the terrorist group Hamas,” he said. “What do they imply in today’s world, and why should we be concerned about the denial of the Holocaust or threats by Iran to destroy Israel?”

Westermann’s interest in the Holocaust began when the subject was offered as a course at the U.S. Air Force Academy, where he was a professor of military strategic studies. “My own research had been about the German police and how the average precinct policeman became involved in mass murder,” he said. “What people don’t know is these policemen were mobilized all throughout Germany and put into battalions of about 500 men and became involved on the Eastern front in Poland and the Soviet Union in mass atrocities.”

His research led to the publication of two recent books, “Hitler’s Police Battalions: Enforcing Racial War in the East” and “Flak” both by the University Press of Kansas.

Westermann, who is a history professor at Texas A&M University-San Antonio, teaches a course about the Holocaust, and said students often sign up for the class seeking to understand how more than 6 million Jews could have been exterminated. He asks his students to look at other instances throughout history in which people of a particular ethnic group were excluded from society and then killed as Jews were in Germany beginning in 1933 to 1945.

“Putting up a sign that says ‘Only for Aryans,’ and then putting up a sign in Dimmitt, Texas that says, ‘No Hispanics or blacks’ in the not so distant past, I think what we start to see is the same dynamics that were present in Germany at that time, which should give us something to think about as we look at what happens to the world around us,” he said.

Westermann joined the Holocaust Memorial Museum as distinguished scholar in residence in August 2011. In this role, he conducts training workshops for museum docents and local educators, and offers regular community presentations to increase Holocaust awareness.

Westermann, a Fulbright Scholar at Freie Universitat Berlin and Research Fellow at the U.S. Holocaust Memorial Museum in Washington, D.C., also served as an academic consultant at the USHMM before joining the San Antonio museum. In addition to serving as a guest speaker on the national series, “Voices on Anti-Semitism,” a podcast series of the USHMM, he has presented at numerous national and international conferences.

To make your free reservation to "Confronting Hatred: Implications of the Holocaust for Contemporary Society," please call (210) 302-6807 or email GarrettF@jfsatx.org.

About the Holocaust Memorial Museum

The Holocaust Memorial Museum is dedicated to educating the community about hatred, prejudice and apathy. Through its exhibits and educational programming, the museum honors the lives of the 6 million Jews and other innocent victims of the Holocaust, and the inspirational legacy of those who survived. For more information, visit www.hmmsa.org. 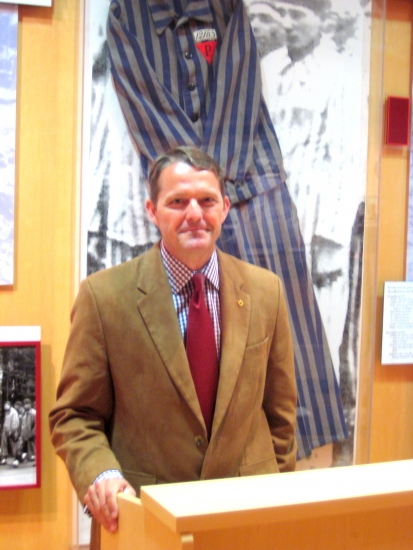