Feeding the homeless is not illegal in San Antonio

In a first of its kind summit, San Antonio political leaders, law enforcement and human services staff met with dozens of Good Samaritan groups and Haven for Hope at the San Antonio Central Library July 28 to clarify the city’s policies on feeding the homeless and to solicit input and suggestions for improvements.

“The City does not have a law or a regulation … that prohibits homeless feeding,” Melody Woosley, Director of San Antonio’s Department of Human Services told the group. “The city code follows state law for food safety and handling procedures.”

Police Chief Anthony Treviño also offered his assurance that it is pefectly legal for a Good Samaritan to buy a restaurant meal and donate it to a homeless person.

The wrong information about San Antonio regulations spread across local and national media last spring after police issued a citation to Joan Cheever of the Chow Train for serving food from her personal vehicle that had not been inspected by the city health department, rather than from her permitted food truck.

Woosley said the city’s primary role is to ensure the safety of the homeless community, who may be more vulnerable and have less access to medical care if they consume bad food. Regulations about safe food handling “applies to food that is sold or given out,” Woosley said, adding that “It applies to all organizations, not just charities.”

The meeting was also an opportunity to thank those who are making a difference.

“Nowhere is the spirit of San Antonio’s generosity more evident than in our desire to feed our homeless neighbors,” District 8 Councilman Ron Nirenberg said as he opened the event. “We are a city of compassion, we are a city of charity and hope, and today’s discussion will only bear that out.”

The summit’s goal “is to empower those who want to give, and be sure they do so safely and responsibly,” said Nirenberg, who chairs the City Council’s Quality of Life Committee.

Representatives of the groups who feed the homeless offered suggestions about how the city can better offer safe food handling training, and they also pledged to be more collaborative with each other, as well as with the Haven for Hope campus, which has gotten the lion’s share of city funding and media attention since it opened in April, 2010.

Scott Ackerson, a vice president at Haven for Hope, who also works for the Center for Health Care Services that oversees Haven’s courtyard, acknowledged that the organization had a tense relationship with groups who did “street feeding” back in 2010.

He said that has changed and Haven is looking to partner with outside groups.  “I’m telling you, it is a very different culture and a different climate now,” he said. “I know we need help … we can’t do it alone.”

District 1 Councilman Roberto Treviño, who has spent the night in Haven for Hope’s courtyard and plans to make another overnight visit, capped the meeting by endorsing several ideas from the group and issuing a surprise challenge over providing bathrooms for people in public places.

“I really like the idea of public bathrooms,” said Treviño. “I’m an architect, and we have a saying that ‘there’s nothing we can’t fix with a little bit of good design.’ So I am publicly challenging local architects to help solve this one. We’ve got to have a solution for public restrooms - ones that work.”

Woosley said the staff would use information and input from the meeting, along with their research from other cities on “best practices,”  to make recommendations for city council to consider this fall.

In the meantime, Treviño left the group with one of one of the Mexican dichos, or proverbs, he often from his mother: "Haz el bien sin mirar a quién,” he said. “In English it is, ‘Do what is right, come what may.’ “ 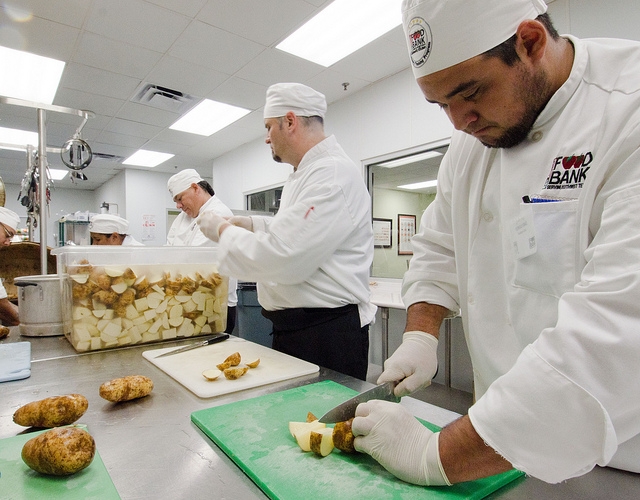