Forum Points out the Scary Truth for Landowners

“Eminent Domain: What’s It All About?” was the perfect title for the San Antonio Area League’s June 4 forum. Most people know very little if anything about the subject, not even that it involves the government’s right to buy your land out from under you for public use.

By the time the audience left, they were well versed in the subject and now know what to do if, one day, someone knocks on their door to tell them that their property, or part of it, is being condemned so it can be replaced by a road or a water line or even an industrial park.

Watch the panel discussion here, scroll down to read more

The level of expertise on the panel was high, which was foretold by the quality of the moderator: former U.S. Rep. Charlie Gonzalez. Currently of counsel with Ogletree Deakins law firm, he served in Congress from 1998-2003. Before that, he was in private practice and was elected as a county court judge and state district judge.

Eminent domain has been around almost as long as our nation. The right to condemn private land, ‘nor shall private property be taken for public use, without just compensation,’ is part of the Fifth Amendment to the U.S. Constitution, as Gonzalez pointed out. It’s a necessary tool when used appropriately.

But Texas faces rapid growth, and development is widespread in rural areas.

“A lot of people are moving to Texas and we are having to build infrastructure,” said attorney Cassie Gresham, who represents landowners whose land is subject to condemnation. “We are seeing that from powerline routing, we’re seeing that with roads, we’re seeing that with water. What I’m seeing, and what is an under-addressed issue, is we are delegating the authority of eminent domain to private companies.”

That’s where many of the problems arise, the panelists agreed.

Gresham explained that the Texas legislature created Municipal Utility Districts, quasi-governmental agencies also known as MUDs, so developers could provide electricity, water and other utilities needed to build homes. They have the power of condemnation. It’s not necessarily a bad thing, but they are all over the state, and no one questions it, she said, adding that she has seen some horror stories.

“What I see in the future is that we are going to have to wrestle with that issue. As the state is growing, how do we provide the infrastructure that we all need and want and how do we balance that against the Texas open spaces that we’ve loved for so long? That’s going to change, and we’re going to have to find out how do our rural interests and our urban interests, how do our suburban interests coincide? I don’t think we’ve figured that out as citizens or in the legislature yet, but that’s something we’re working on.”

“Last time I looked, there were over 6,900 condemning entities in the state of Texas,” said Britin Bostick, whose Stewardship Strategies consults on land use, preservation and other matters dealing with land. She noted at the forum that it had been a while since she checked, and the next day she reported that the number was now up to almost 16,000.

“We’re not talking about just cities and counties, we’re talking about MUDs, some school districts have it, and increasingly that is being handed off, so you have all these organizations of various types that have the ability to say we need this property for this purpose,” she said.

And whichever kind of organization knocks on your door to say it needs your property, it comes as a shock.

“Instead of it being a negotiated sale, they (the condemning entity) do their homework, they hire an attorney, they hire their engineers, they hire their planners, whoever they need to hire, and the landowner is suddenly hit with notice that they’ve got condemnation proceedings against them. You have a very short window in which you have time to respond.”

She spoke of the need for landowners – including urban dwellers who own rural land, such as a weekend retreat in the country or a family farm – to be educated about eminent domain. The compensation they get is legally supposed to be “fair market value,” but there is debate on whether prices are actually fair, and people don’t know how to protest and fight for more.

Another thing few people know, she said, is that you are taxed on what you are paid for your condemned land. There’s an IRS form to defer taxes, but Bostick discovered that most accountants don’t know about it. So it has to be up to the landowner to know, and ask for it.

Marissa Patton, who works with the Texas Farm Bureau to push for legislation that makes eminent domain fairer to landowners, said it’s a tough battle but they are making headway. The organization has joined with several others as Texans for Property Rights in its efforts to protect landowners through legislation.

The main complaints landowners have, she said, are lowball offers, unfair contract terms, an overall lack of balance in the process and intimidation by the condemning authority.

Last session, she said, they got pretty far with basic protections without the need to negotiate – common-sense things like closing gates after coming onto the property, maintaining the easement right-of-way, making sure construction staff stay on the area of the property the project is going across, having insurance. She said landowners can usually get these things if they negotiate, but they should be automatic.

They’re gearing up for the next session, she said. “There’s a variety of things we’re going to be looking at next session to try to make these improvements again.”

When it was Schertz Mayor Michael Carpenter’s time to speak, he raised his hand and asked, “Is there anyone else in the room who has voted to take land from someone to use it for a project that they didn’t want done? Just me? OK, great!”

Use should be sparse

But despite being on the opposite side of a controversial issue, he pointed out that the other panelists had agreed that there is a proper place for eminent domain but “it has to be, it needs to be, it necessarily should be very, very limited.” He noted that since he joined the City Council in 2005, he has voted for condemnation just four times.

He told of one time he believed it was necessary: when the Bexar County portion of his city, which was rural and on septic tanks, was undergoing development and needed sanitary sewers. It was such a tough decision that his council wasn’t even unanimous in voting to do a survey for it. It eventually got done.

Then there was the time he drew the line: when a neighboring city wanted to turn an existing road into a toll road, built by a private company, connecting to I-35 and tried to include a stretch of that road that went through Schertz, Carpenter and the City Council stopped it.

“It’s not right to condemn private property for a profit-making venture,” he said.

One big distinction between condemnation by a government entity and a private one, he said, especially in a less populated area, is “the folks that we say we may be taking land from, or land rights from, are our neighbors, and they will see us in H-E-B, they’ll see us in Lowe’s, and one of them, my friend Timmy sees me in church and says, ‘You guys are really gonna take that much land off the front of my lot? You’re gonna kill the business that I have on the front there and only leave me with my storage business? Come on, really?”

Also, in any city or county, no matter how big, people know where to find elected officials and can vote them out, but locating officers of a private outfit aren’t so easy to find.

Bostick made a point about just who is often the person facing condemnation.

“One thing we do need to be very thoughtful of when we’re looking at who has condemnation authority is the more that becomes the purview of private development corporations, we’re still today doing a little bit of what used to be called slum clearing and is now called economic revitalization. What that really means is somebody who has less has to pay the price for somebody to have more. And there’s a real equity issue there because all that ‘slum and blight,’ it’s not slum and blight, it’s where people live, it’s their home and community and networks, and so we need to be really careful about who gets to say what is of value in communities.”

Gonzalez summed up the overall feeling about the trend of eminent domain this way: “I’m sure, when the Fifth Amendment was adopted, that everyone was under the impression that the entity that would be exercising eminent domain under that power was going to be government. Barney Frank used to say, ‘Look, government is just another word for when people want to do something together.’ But is a MUD another word for when people want to do something together? Or something that’s driven by developers and creates a utility district? I’m not sure that we’re going to turn back the hands of time on these issues. I think that’s what bothers almost every citizen out there … that it’s not the traditional government, it’s not the county, it’s not the city.”

Database of entities in Texas with eminent domain authority

Texas A&M School of Law Research Guide on Eminent Domain (the first case listed is my friend Julia Crawford, whom I spoke about – Britin Bostick) 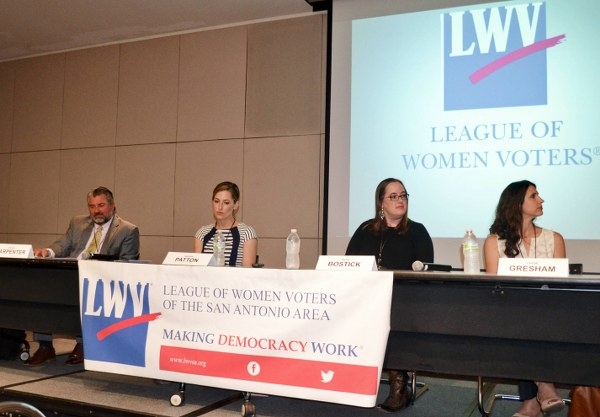