FRACKASO: Exploring the Rush for Shale Through Art

On April 18th at 7 pm, the eve of the 3rd annual conference of the Eagle Ford Consortium, the Esperanza Peace and Justice Center presents Frackaso: Portraits of Extraction in Eagle ford and beyond art exhibit—named as a play on the English word “fracas” (a noisy disturbance or quarrel) and the Spanish word “fracaso” (failure, ruin, bust). The FRACKASO art exhibit will be San Antonio’s first major public forum to look at fracking from the bottom up. Yet the aim of the exhibit is less to debate than to create space for those on various frontlines of fracking to give material expression to their experience, attending to dimensions of the oil and gas boom that often go unaccounted for in the official narratives of government and industry.

Since 2009, tales of the booming Eagle Ford Shale economy have crescendoed and now verge on the fantastic--billions of dollars generated, thousands of jobs created, millions of barrels pumped. But how have people throughout South Texas and beyond made sense of how the rush for shale has impacted their everyday lives and the landscapes they call home? San Antonio is just a few miles up the road from the most intensive extractive activity in the Eagle Ford Shale, yet discussion of these questions has been largely abstract and limited to the economic dimensions of the boom, with public conversation on benefits and costs coordinated by those in powerful decision-making positions.

In particular, the show highlights the perspectives and voices of those who do not stand to benefit from extraction activity in South Texas and beyond. The creative pieces and testimonios featured in Frackaso have been produced largely by those who do not own land or mineral rights; by women, elders, and children; by those living next door to refineries or other extraction infrastructure; by those whose land or water or health has been damaged; by the mestizo descendants of indigenous peoples; by those who feel they have no choice but to seek work in the industry; by those whose bodies and lives bear the uncertainties and ambivalences of a boom that is sure to bust. Artwork featured in Frackaso come from all over North America--from Canada to Mexico to New York State to Cotulla, Texas--and encompass multiple genres, from the literary and visual arts to photography, performance, and installation.

The opening reception on April 18th, 2014 will feature a total of 28 visual and literary artists, photographers, and filmmakers with works such as a short documentary on San Antonio’s Calumet refinery; satirical short film titled Frack U, Mexico by Gregory “Gringoyo” Berger (Mexico City, Mexico), an excerpted performance from “The Wellspring Waxwing Museum” by Leslea Kroll (Alberta, Canada), and poetry readings by Kamala Platt and Mobi Warren (San Antonio, Texas).

Frackaso will run through August 31st, 2014. Gallery hours will be Monday through Friday from 10 am to 7 pm. A series of programs focused on the Rights of Nature philosophy and global movement will accompany the duration of the show. 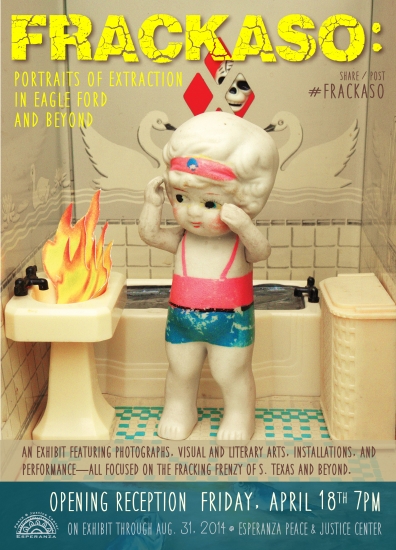