In honor of its tenth anniversary in San Antonio, The Union will open its doors Labor Day, Monday, Sept. 1, with nine complimentary 60- or 90-minute hot yoga sessions for San Antonio’s first Free Day of Yoga.

Free Day of Yoga attracts thousands of participants in Austin, Dallas, Houston, Corpus, Los Angeles, Philadelphia, Guam, and now, San Antonio.  Back in 1999, when some yogis in Austin came up with the idea of a smorgasbord of classes for Free Day of Yoga, Stevan Falk was testing the waters with the ancient Indian practice.

“I was the seven-year-old in PE class that couldn’t touch his toes,” admits Falk. “At age 25, I would roll out of bed every morning thinking 'I’m not supposed to feel like this.' One month after I gave yoga a shot, I woke with no knee pain or back pain. Plus, I was missing about 15 pounds of fat with no change to my diet.  Fast-forward two months and I had lost 40 pounds. Yoga allows me to do the things that I really love to do, like lift heavy weights, CrossFit, compete in the highland games, marathons and triathlons.”

About the same time, Falk’s friend Lisa Ingle-Stevens had dabbled in yoga and was seeking an exercise plan to help a friend with migraines, brought on after four concussions.

“The minute I walked out of my first Bikram Yoga class I knew that not only had I found something I was going to do the rest of my life, but felt this burning desire to make this my life’s work,” recalls Ingle-Stevens, who at the time was planning on attending law school.  “I remember like it was yesterday, walking out of my first class in the snow (in Denver) and feeling on top of the world. I wanted to become a yoga teacher and expose and help as many people as I could to this life-changing practice.”

Ingle-Stevens and Falk applied for an SBA loan. After having many doors slammed shut, they opened a Bikram Yoga studio in the spring of 2004.  Ten years later, 400 people practice Bikram, Hot or Power Yoga at The Union’s three locations each day, and they also manage Bust a Move CrossFit.

Liz Peters was one of the first employees at The Union. Ten years later, she teaches both yoga and CrossFit. “All I knew about yoga 10 years ago was that Madonna did it and she looked pretty darn good,” says Peters. “Yoga definitely made me a better person. It has made me appreciate what I have in front of me. People will pay out the wazoo for handbags, shoes, clothes, electronic equipment, why not spend that money on yourself?  You are worth it.”

Falk and Ingle-Stevens want to spread their love for wellbeing with area residents as they celebrate their ten years as Alamo City health and fitness advocates.

Beyond the free Labor Day classes, The Union is offering the Get Hot Challenge, which is any combination of 60, 60- or 90-minute yoga or CrossFit classes in 60 days, and unlimited yoga and CrossFit classes at all locations are reduced to just $99 per month.

For more information, locations or schedules, visit www.theunionsa.com or bustamovecrossfit.com 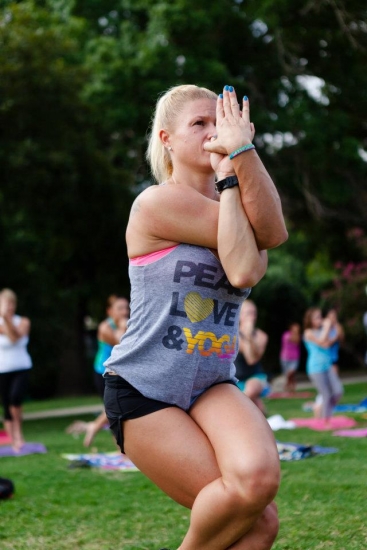