Polar Fest was held at the San Antonio Event Center, 8111 Meadow Leaf Dr., near Marbach Road and Loop 410. Polar World Enterprises aims to develop Polar Fest to be on par with other nationally-known annual music festivals like SXSW (South by Southwest) to give local artists public exposure.

With the collaboration from nonprofit organizations, such as Big Homie Inc., Polar Fest provides an outlet for future leaders to take part in the community, developing neglected and underserved areas. At the event, Big Homie Inc. gave away free Easter baskets and a bike to children in attendance.

The name Polar Fest, as described by Top 4 Music Group co-owner Anthony Anderson, shows that everything is Polar, meaning that Polar World Enterprises is the coldest (best) organization that provides a fair opportunity for hip hop artists to focus on their music, while Polar World assists the artists with business management, publishing, promotions and merchandising. Anderson, who also goes by Cau Asian (CA), described the concert as “nothing but pure unfiltered energy.” The event was an opportunity for the artists to provide fans with an emotional experience unique to the music itself, said Anderson.

According to Anderson, a second event may come as early as July. For more information contact Polar World Enterprises at 210-535-9243, polarworld50@gmail.com or www.thepolarnetwork.com. 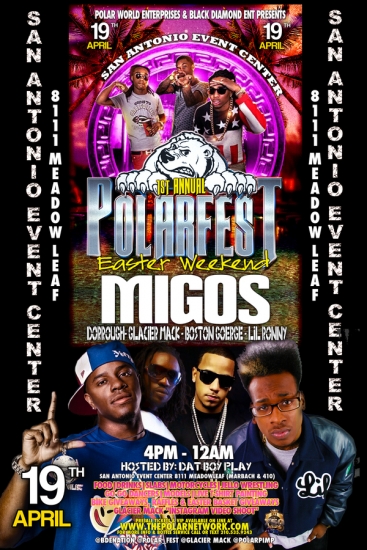