Sometimes at public meetings, when it’s time for citizens to address whatever governmental body is presiding, their questions or concerns aren’t germane to the discussion — they’re off-topic or meant for another body.

The first public meeting of Mayor Ron Nirenberg’s housing task force was different. On Tuesday Oct. 3, all of the housing questions that audience members lobbed toward the five-member task force landed. None were off limits.

(Watch full video of the meeting here, scroll down to read more)

In the weeks leading up to the task force’s first public meeting, Nirenberg had said the task force was created to craft a “comprehensive and compassionate” housing policy — emphasis on the word “comprehensive.” Lourdes Castro-Ramirez, a former deputy secretary at the U.S. Department of Housing and Urban Development, repeated the charge.

“From homelessness to home ownership, we have been tasked to ensure that ongoing efforts leave no San Antonians behind,” Castro-Ramirez said to about 200 gathered in the Central Library’s auditorium space.

When it was time for questions, it felt like no San Antonian had forgotten to ask one.

From the East Side, Salena Santibanez, 34, railed against the influx of Airbnbs in Dignowity Hill — where there are about 40 active units in the area — and how they are starting to creep into her community just east of New Braunfels Avenue, known as Harvard Place-Eastlawn. She mentioned a crack house that had been renovated only to be sold and turned into an Airbnb.

“That house is accessible to a family who can walk their child to Washington Elementary,” Santibanez told the task force.

After the meeting, she elaborated on the changes taking place, the gentrification, in the East Side neighborhoods.

“Dignowity Hill has the housing stock for it … but the properties are nicer,” she said. “But for our neighborhood (Harvard Place-Eastlawn) that was built in the ’50s for the military, these homes can be bought up like that. It’s already on our doorstep.”

From the South Side, Brady Alexander, who represents the Mission Reach-Hot Wells Neighborhood Association, asked about the $20 million affordable housing bond. When it comes to spending that money, Alexander asked, “Would you support a policy that honors the neighborhood association’s decision?”

Task force member Gene Dawson, president of Pape-Dawson Engineers, pointed out that such a decision is not the task force’s to make. The task force will simply create the policy framework from which future decisions will be made.

“We will not be designating certain neighborhoods at a task force level,” Dawson said.

From the West Side, Graciela Sanchez, activist and director of the Esperanza Peace and Justice Center, mentioned the San Antonio Housing Authority’s efforts to apply for a second Choice Neighborhood grant. The first was a $29.7 million HUD grant received in 2012 that kick started the newly-built, mixed-income East Meadows apartments in Santibanez’ East Side neighborhood, which required the demolition of the old Wheatley Courts.

In order to build East Meadows, the families at Wheatley Courts scattered across the city. They all were offered Section 8 vouchers and the opportunity to return to East Meadows upon its completion.

Now, SAHA intends to apply for another Choice grant, but this time for the Alazan Courts on the near West Side. If it were to go through, Sanchez said, a displacement would occur just like at Wheatley Courts. SAHA officials don’t see such development efforts as displacements because the residents are given the option to return to the new apartments.

“How do we develop the policies before we see displacement of our communities?” Sanchez asked task force members.

“Many of the things and issues you have brought are issues we are all keenly aware of and we do hope that through this process that we have an opportunity … to advance a set of policy recommendations to the mayor and to the City Council,” Castro-Ramirez said.

The many questions begged a larger one: Can the task force get it all done? Task force member and former Councilwoman Maria Berriozabal provided this anecdote as context: Earlier in the day, she had received a phone call from a TV reporter wanting to interview her about affordable housing.

“She said she had done an interview with me 40 years ago on affordable housing,” Berriozabal said. “I’ve been at it for a very long time.”

During his welcoming remarks, Nirenberg acknowledged the Herculean effort that’s ahead for the task force.

“It will not be easy work, it will not be for the faint of heart,” Nirenberg said. “And in many ways, embarking on this journey right now is an acknowledgement that these are going to be some difficult conversations.”

At Tuesday’s first public meeting, the task force members and Nirenberg each provided their take on San Antonio’s housing challenges and their individual visions for the work ahead. Dr. Christine Drennon, Trinity University associate professor sociology and anthropology, delivered a history of housing inequality in San Antonio. And The group’s challenge was repeated often — the task force was created to address everything from housing availability to affordability to gentrification, which can lead to displacement.

The group plans to meet every two weeks — the next meeting is scheduled for 5:30 p.m. Oct. 17 at the Central Library, 600 Soledad St. The meetings are open to the public. And larger community forum-type events will be held along the way.

By then, perhaps, answers to the audience questions — and many others — will be answered or addressed.

This article was originally published in Folo Media. Folo Media is a nonprofit, nonpartisan media organization focused on the challenges and opportunities for vulnerable communities in San Antonio, Texas. 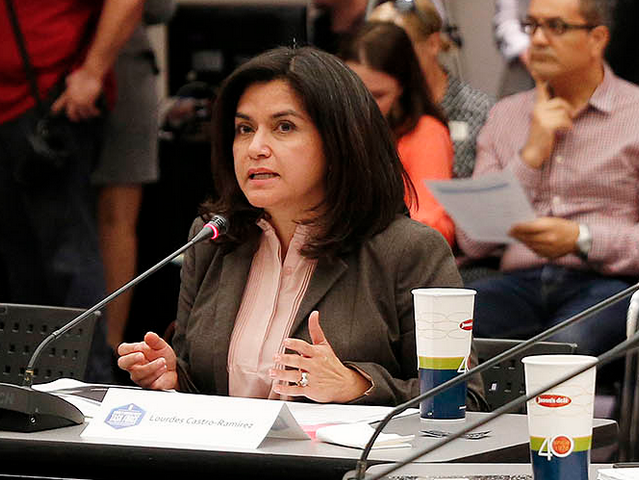