Back when I was young, I remember pretty much the only time you were given a bag or paper wrapping when you bought something in Mexico was if you purchased feminine hygiene products. I used to kid that the wrapping around your purchase was a dead giveaway that it was that time of the month. When we went to the market, we brought our own sturdy reusable bags made out of either ixtli or plastic, and for smaller purchases, it wasn’t a problem to carry them in our hands until we got home.

At the tienda de abarrotes, you couldn’t buy soda pop or bottled water unless you brought in your own glass bottle to exchange.  I also remember how newspaper or strips of paper were often used in Mexico as a plate or napkin.

Talking to an old man on the island of Janitzio, known for its butterfly net fishermen, he tells me that things have changed in the last 50 years. He holds up a spool of nylon thread and laments how the fishermen use this in their hooks now. “It stays in the lake for 40 years without disintegrating,” he says. He also states that back in his day, the men would fish four times a week, alternating between the day and evening.  Now, they fish unrestricted so that the lake is not replenishing itself.  “We used to throw back in the water any fish smaller than 10 centimeters,” he adds.  “Now they keep even the tiniest of fish they catch.” The old man is not educated. But he’s wise, as are many from his generation and those before him.

As our society “advances,” we are destroying our environment.  The previous generations may have been clueless about global warming and landfills, but they had a more symbiotic relationship with nature. Today, plastic bags, cups and bottles are everywhere in Mexico, even used by all the street vendors.

Progressive cities in the U.S., like Santa Monica and Austin, are banning the plastic bag, yet in Mexico use is growing so much that it seems they could stuff pyramids or mountains with all the non-recyclables.

Another major problem with our environment is related to our food sources.  The U.K.‘s Guardian reported, “Nitrous oxide, released by fertilisers and animal manure, is the most potent of the greenhouse gases that cause climate change. The UN's climate body has called for deep cuts to those emissions.”  The newspaper continued to blast societies for a drastic increase in meat consumption.

Most of Mexico is fertile and grows wonderful grains, fruits and vegetables, many of which are exported to the States. These foods have always been staples in the Mexican diet, yet people today seem to think a meal is not a meal without your chicken, fish, pork or beef.

Meatless foods are among the best, and cheapest, in Mexico.  For five pesos (37 cents) you can buy a big avocado, half a dozen thick blue corn hot tortillas, a huge bunch of fresh squash blossoms, or about a cup of nopalito salad.  At the Sunday market in Zirahuen, Michoacan, a favorite treat for the young and old are the fruit cups.  There are strawberry and mango chunks topped with cream, jicama slices, carved mangos, pineapple or cucumber cups, and more, at five pesos each. Mexicans often add chili, lime and salt to their fruit, which is actually part of Ayurvedic diet recommendations. According to the ancient East Indian science of life, it’s beneficial to combine salty, sweet, sour and spicy foods.

For 10 to 12 pesos (less than a dollar), you can buy quesadillas or gorditas filled with squash blossoms and/or pinto, fava or garbanzo beans. A dollar will also buy you cold, pure, coconut water that will make you question why anyone would rather drink a can of soda. That same dollar will buy you a freshly squeezed green juice.  A popular jugo verde recipe seems to be celery, parsley, nopalitos, oranges and pineapple. But these, too, can be special ordered. My favorite skipped the pineapple, cut back on the orange juice, and added carrots and jicama to add more color and nutrients to the “green” juice.

Aside from the fact that people in the Western world consume much more protein than required, if you’re looking for plant based protein in Mexico, peanuts are everywhere.  Ten pesos can buy you a bag of fresh peanuts in the shell, cacahuates japoneses (covered in a crunchy soy mixture), roasted with dried chili pepper or sprinkled with chili powder and lime.

While the Guardian states that “Meat eaters in developed countries will have to eat a lot less meat, cutting consumption by 50 percent, to avoid the worst consequences of future climate change,” Mexico’s consumption has grown at about 75 percent in recent years while herd sizes have decreased by 40 percent. As a result, the country is importing more and more of its animal proteins. Ironic for a country where the tradition of the prior generations was so environmentally friendly, nutritious, self sustainable and economical. 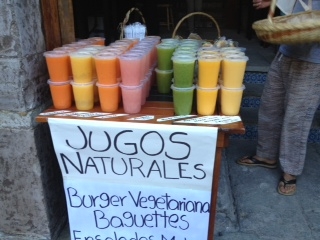