How will Texas energy and environment fare under Trump?

Donald Trump’s upset win this week was generally cheered by the Texas oil and gas industry and lamented by environmentalists who found a major ally in the Obama administration amid long-suffering efforts to protect the state’s air and water and promote renewable energy sources.

The reactions largely make sense: Trump has vowed to lift restrictions on oil, gas and coal production and greenlight controversial energy infrastructure projects like the Keystone XL pipeline. The man he has selected to lead his Environmental Protection Agency transition team is a climate change skeptic. And he has indicated he will repeal or abandon a slew of environmental regulations President Barack Obama has rolled out during his final term in office, including a state-by-state plan to fight climate change by shifting away from coal power to natural gas and renewables — a policy Texas is challenging in court.

But energy experts and renewable energy groups say Trump’s victory may not be a win for the Texas oil and gas industry — or a totally bad thing for wind and solar. It all remains to be seen, though, they say, given Trump’s lack of detailed policy proposals and penchant for changing his mind.

“I think anybody that tells you anything specific doesn’t know what they’re talking about,” said Blaine Bull, a spokesman for the Texas Clean Energy Coalition, a group that supports natural gas, solar and wind energy. “There is the paradox that is Donald Trump.”

While Trump’s policies have been vague for the most part, the places where he has been certain are actually problematic for the Texas oil and gas industry, said Michael Webber, deputy director of the Energy Institute at the University of Texas at Austin.

For one, Webber said, the main priority of Trump’s energy plan is to help revive the coal industry, whose biggest competitor is natural gas — and Texas is the nation’s top natural gas producer.

“If Trump does market intervention to protect coal from natural gas, that is bad for natural gas, and natural gas is a major part of Texas industry,” Webber said, noting this is better news for big coal-producing states like West Virginia.

The natural gas industry is also “a major beneficiary” of rules like Obama’s Clean Power Plan that seek to clean up carbon emissions from the power sector, Webber said, “so by releasing or removing some of those regulations in protecting coal would be bad for natural gas.”

The Electric Reliability Council of Texas, which says the power plan would lead to higher power prices and threaten electric reliability, would disagree with that, as would most of the state’s Republican leaders, who have painted it as tremendous federal overreach.

Austin lawyer Michael Nasi, who represents power generators who rely on coal, said such regulations also have increased the cost of power generation for natural gas in some cases and “all warrant serious revisitation.”

Trump surely will change many of the Obama administration’s new environmental regulations, which were mostly put in place via executive order or Environmental Protection Agency rulemaking, said Bull of the energy coalition. That is clearly bad news for environmentalists.

Beyond that, though, he said it’s almost impossible to know what to expect because of Trump’s personality and the many mixed messages he espoused on the campaign trail.

“One week he says 'Drill, baby, drill,' and then the next week he says, 'Well, you know, I think local voters ought to decide whether they want drilling in their communities,'” he said. “So it’s like, 'Alright, where he’s going to be?' He may pleasantly surprise those who are interested in clean energy.”

And if Trump doesn’t renew subsidies when they expire in a few years, Bull said it may not matter much — at least for wind, which is expected to be fairly profitable by then.

“There’s money to be made in solar and wind, so perhaps he sees that,” he said.

That hope was reflected in a statement by The American Wind Energy Association following the election that said it was “ready to work with President-elect Donald Trump and his administration to ensure that wind power continues to be a vibrant part of the U.S. economy.”

Kathleen Hartnett White, a Trump energy adviser who formerly chaired the Texas Commission on Environmental Quality and is being considered for a position in his administration, said that — like her — the president-elect is focused on the importance of “taking advantage of the vast energy resources we have as a means of stimulating economic growth and job creation and human welfare.” Also, she said, dialing down regulation in collaboration with Congress.

But Webber said Texas isn’t going to benefit much from Trump’s proposal to lift restrictions on energy production because that is centered on increasing access to federal lands, which are limited in the state. While production likely would increase in states that have more federal land, that would mean more product on the market and lower prices that would hurt profitability of Texas oil and gas operators.

"So oil and gas companies in Texas that are active in many states might benefit in those other states, but the Texas oil and gas production might have a disbenefit," he said.

And then there’s the border wall.

Texas sells millions of dollars worth of natural gas to Mexico every year, and Mexico is looking to expand its own energy production. If Trump throws up a physical, or figurative, barrier, Texas could lose out, he said.

“Oil and gas companies have been pushing for open markets for decades,” he said. “The wall is a step in the other direction.”

Disclosure: The University of Texas at Austin has been a financial supporter of The Texas Tribune. A complete list of Tribune donors and sponsors can be viewed here.

This article originally appeared in The Texas Tribune at https://www.texastribune.org/2016/11/12/how-will-texas-energy-and-environment-fare-under-t/

**Cover Image: President elect Donald Trump speaks during a campaign stop in Laredo, Texas during July of 2015. Photo by B. Kay Richter. 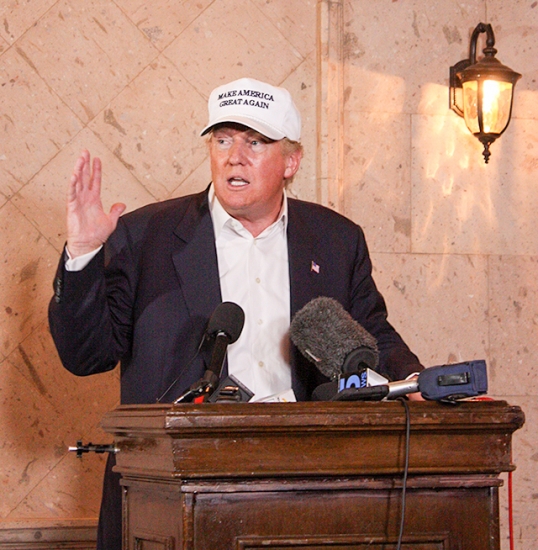