Increased raids by Immigration and Customs Enforcement Border Patrol agents are frightening women away from the only reproductive health clinic in the Rio Grande Valley, according to a reproductive rights advocate.

The observation came from Nancy Cardenas, Texas LAN Associate Director for State Policy and Advocacy at the National Latina Institute for Reproductive Health, during a panel discussion of the anti-sanctuary cities law, SB4, at the July LULAC National Convention in San Antonio.

In the 4,900-square-mile Rio Grande Valley, there is only one reproductive care clinic, making access to reproductive services a challenge in itself, Cardenas said. “One of the issues that we encountered during the SB4 conversation, and when the raids started happening, was Border Patrol and ICE (Immigration and Customs Enforcement) along routes to health care clinics,” she said.

Cardenas said people have become more hesitant to get health care due to the increased law enforcement activity near the clinic. “Folks don’t just come into this space and stop needing reproductive healthcare services,” she said. “We live multi-issued lives.”

Cardenas made the remarks during a panel discussion about the effects of the law that is being challenged in court by several Texas cities as well as other local governments. (See more coverage here: http://nowcastsa.com/category/sb4 .)

Watch complete video of the panel discussion here and scroll down for the rest of the story:

Saenz talked about the legal aspects of the bill and joined Alanzo and Duarte in condemning the measure which he said “seeks to ensure that immigrants throughout the state are afraid.”

Saenz said even the signing of the bill was extraordinary. “Governor Abbott chose to sign (SB4) on a Sunday afternoon, on Facebook Live, with the only media outlet invited to be there, Breitbart News.”

He took issue with those who call SB4 a “Show Me Your Papers Law” because it doesn’t require law enforcement to ask for documentation.  “This means that each individual officer whether they’ve been on the job for a day or ten years, and even if they’ve been on the job for ten years they were never trained on immigration law, each of those officers get to decide whether and how to enforce immigration law.”

Saenez called the bill a “Badged Vigilantes Provision,” not a “Show Me Your Papers Provision.”

Alzano said the bill would change the way that ICE detainer requests would be handled after the law is put into effect. “SB4 requires all local counties and state law enforcement agencies or correctional institutions to hold anyone in custody who has an immigration detainer request,” he said. He compared that to how detainer requests are followed now. “Right now, ICE can send a request to hold somebody. It's not an order, it's not a warrant, and that's why some of you will see around the country, lawsuits against sheriffs who are holding people because it's a request.”

Duarte called the bill “ground zero in the fight for our constitution.” He predicted victory in the suit challenging the law. “We are going to win and the reason we are going to win is because we are organizing and fighting back,” he said.

Duarte said individuals can help fight the bill in several ways, including joining the growing the pool of plaintiffs in the federal court challenge. “You can join the lawsuit if you are a victim, obviously there is always a need for plaintiffs that have been affected,” he said. He also asked for help putting pressure on local elected officials and asked Texans to join base-building efforts as well as voter registration efforts.

Cardenas talked about the human toll she is already seeing in the Rio Grande Valley. “When we talk about SB4 we always like to apply a different lens to it, this is an intersectional issue,” she said. 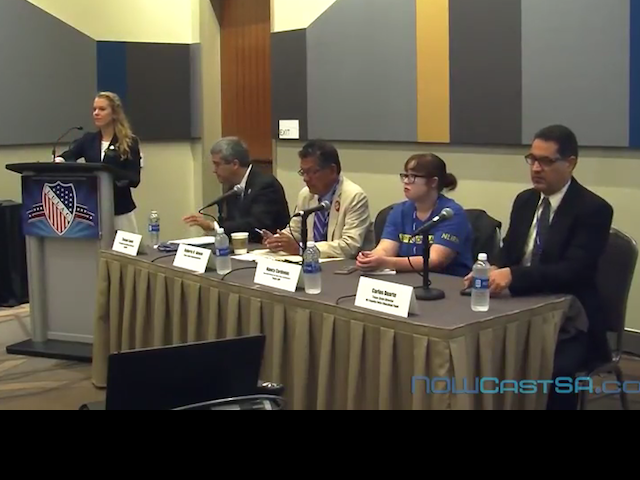