Yes, Infill housing can be compatible, sustainable and affordable 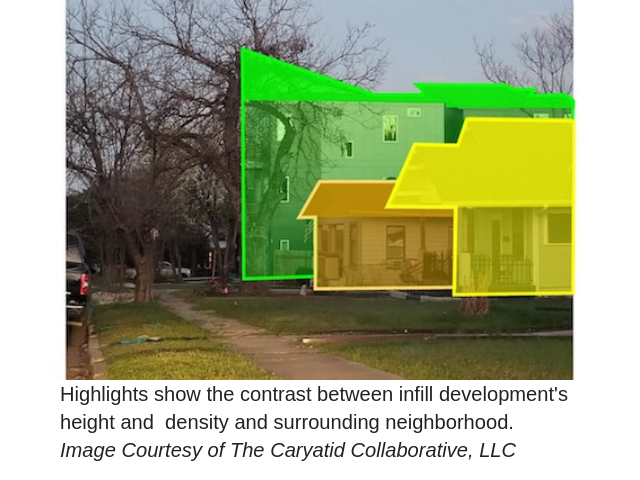 Infill housing can be designed in a way that is compatible, sustainable and affordable, as I demonstrated in this presentation to the Tier 1 Neighborhood Coalition meeting on Sept. 22, 2018.

We know that in order to accommodate San Antonio’s growing population, we need more housing. Infill housing is one solution to accommodate more people in our near-downtown areas. Often neighborhoods fight this infill because what is being built is not compatible with the surrounding neighborhood, or because the infill housing that is being built is luxury housing, which contributes to problems like speculation and displacement.

My presentation discusses the challenge to provide more affordable housing in the urban core as outlined by the Mayor’s Housing Policy Task Force. It can be surprising to learn that thoughtful design can actually increase the density in an area in a way that neighborhoods are ready to support.

Click on the links in the presentation notes below to jump to that spot in the video.

Who is affordable housing for?

What is the City doing today?

What is coming up?

What is Form-Based Code?

"According to the Form-Based Codes Institute, by-right zoning is critically important to increasing housing affordability at all levels of the housing spectrum. To accomplish this, conventional zoning codes should be updated to form-based codes (FBC) that effectively prescribe the outcome desired by the community. FBCs regulate the form of the buildings in a prescriptive manner and at a sufficient level of detail so that the outcome is predictable. This means that the conventional design review process is unnecessary, enabling by-right review. To accomplish this, communities should:

Infill Development and Preserving Neighborhood Character and Integrity Enhancing your neighborhood in the face of redevelopment pressure. 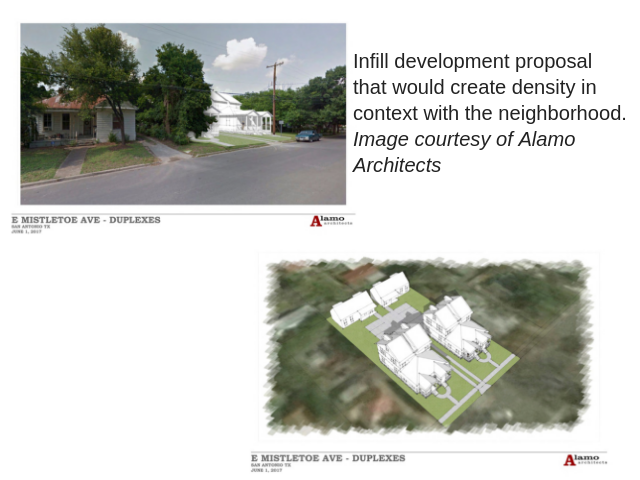 Case Study: E. Mistletoe Duplexes, Tobin Hill North
This one is across the street from me, and I’m intimately familiar with this development. These two lots had two 1940s brick duplexes on them. The lots in this part of the neighborhood are pretty deep, and parking for the four units was at the rear of the lot. The lots here are all 50 feet wide, and there is about a 25-foot setback on the surrounding single story homes. The few two-story homes in the area are on the corners and have significantly larger setbacks. There are no alleys here, so the fence line at the back of the property is shared with the homes on the next street.

There was nothing wrong with the duplexes, and they were occupied until they were purchased in 2016; however, the developer obtained a demolition permit, and cleared the lot for their infill project.

The layout they proposed is one many of us are familiar with. The developer’s proposal included rezoning the lots to Infill Development Zone (IDZ), and placing six two-story houses facing a center drive. The two houses along the street would be setback only 10 feet from the property line. In Denver, they call them slot homes, and recently that city passed an ordinance that does not allow them to be built there any longer.

Our neighbors talked with the developer over the course of several months about the proposed site plan and design of the project. We took photos of other projects the developer had done and gave our feedback, hoping to find a compromise that would contribute to the neighborhood. Initially, the neighbors were very opposed to six units here. There just didn’t seem to be enough room. Everyone was concerned about density and parking.

Nearly a year into the discussions with the developer, Jim Bailey of Alamo Architects reached out to the neighbors to find out our concerns. After listening to us, and considering what the developer’s needs were, he offered a new design for the lots. We’ll call this the Compatible Design.

The Compatible Design still included six units, and it had the same number of square feet that the developer wanted to achieve for the project. But the Compatible Design looked completely different. In showing the design to the neighbors, they all had a VERY positive response. Some said it was like night and day.

The difference is that Compatible Design is incremental growth. The houses in the Compatible Design retain the original setbacks. The parking is in the rear of the main houses, not out front and not attached. The design is complemented with the established development pattern on the street. The front part of the houses in The Compatible Design are single-story, going up to two stories in the rear. They are at a scale that the neighborhood and street could sustain. The design includes two small units at the rear of the property, which could have replaced the affordable housing that was torn down, something that is needed in our neighborhood. When presented with thoughtful design, the neighborhood said they would support it.

Unfortunately, the developer didn’t accept the design. They are building their proposed layout of six two-story homes, setback only 10 feet from the front property line and five feet from the sides and rear. They are nearly done with the exteriors now.

Regardless, through this process, my neighbors and I discovered that there is room for infill if it is designed in a way that is compatible, sustainable and affordable.

What actions can you take?
Join the TWG or committee and/or attend the TWG and committee meetings