Inspiring life of Henry B. Gonzalez captured in student documentary

In the Texas Senate in 1957, when filibusters were used by southern legislators to weaken racial integration mandates, Henry B. Gonzalez and Abraham Kazen filibustered for a record-setting 36 hours to successfully kill bills that would have enabled segregation.

Gonzalez’ advocacy for equality and justice as a San Antonio city councilman, a state senator and later, as a U.S. congressman, are part of an ongoing documentary and oral history project about his life and legacy sponsored by St. Mary’s School of Law.

“I hope people will find inspiration and guidance from it,” said former judge and congressman Charlie Gonzalez, Henry B.Gonzalez’ third eldest son of eight children.  “History is a great teacher,” he said.

There is no biography yet on the life of Henry B. Gonzalez, affectionately known in South Texas as “Henry B.”  This documentary is the first of its kind, said Teresa Van Hay, director of the project and documentary filmmaker.

The project started a year ago and is part of the 100th year commemoration of Gonzalez’s birth. Van Hay said the idea originated with St. Mary’s University Law School Dean Stephen M. Sheppard as part of an effort to highlight alumni such as Henry B. Gonzalez for its upcoming centennial celebration.

In collaboration between St. Mary’s public history program and the law school, 30 students undertook “the intensive work of research, interviewing, shooting and editing” to complete this documentary (so far), Van Hay said in an email. In  commemoration of the 100th anniversary of Henry Gonzalez’ birth, a 13-minute version of the documentary was screened on May 3, 2017 at St. Mary's School of Law. (click here to watch the documentary: https://www.dropbox.com/s/kfzx560n7b3eqsi/Viva%20HBG.mp4?dl=0 )

The video focuses on how the 1935 graduate of San Antonio’s Jefferson HIgh School lived life as a public servant. It features interviews with Gonzalez’ congressional staff members, Eugene Rodriguez and Nancy Libson, Democratic Congresswoman Nancy Pelosi, his grandson Henry B. Gonzalez, III and San Antonio businessman Max Navarro. It also includes vintage C-Span video of Henry B. speaking on the floor of the House.

Related videos: Webcast: The Historic Impact of Henry B. Gonzalez

The St. Mary's project will resume in January at which time people who have stories and artifacts of Henry B. Gonzalez can contribute to the project and be included in the last edit of the documentary, Van Hay said.

Staying true to public history practice, she added, will be an opportunity for people "to speak their mind, pay their tribute, even raise their questions and register their protest.” During the 1960s and 1970s, Van Hay explained, activists in the Chicano movement had a complex and sometime bitter relationship with Henry B. Gonzalez. She said she hopes their voices in the project will help bring peace and resolution to those tensions.

The first Mexican American U.S. Representative from Texas, Henry B. Gonzalez was re-elected 17 times from 1961 to 1998 to serve San Antonio’s 20th Congressional District, which included the West Side and downtown.

In Congress, he chaired the powerful House Banking, Finance, and Urban Affairs Committee which promoted legislation to end home loan discrimination by banks and strengthened laws against financial crime.

"Much of what is happening today resembles the fights since the turn of the century,” Charlie Gonzalez said.

"Laws that discriminate, educational systems that shortchange minorities, a health care system which results in a more difficult life, shorter life spans for minorities — all of that was always there” he said.  People need to be reminded that struggles of the past were steps forward toward a more just society, he said, adding: “It is nowhere near the end of the journey.”

Gonzalez’s life  was in sharp contrast to the anti-immigrant Senate Bill 4 signed into law in 2017 by Texas Gov. Greg Abbott and the anti-Mexican statements from then-candidate Donald Trump, said Van Hay. “Henry B. exposed the way in which hate works to divide and control people. He championed the greatness of the United States thanks to immigrants,” she said.

SB4, the “anti-sanctuary cities bill," allows law enforcement officers, including campus police, to question a person’s immigration status even before a person is arrested. The law, which is being challenged in federal court by San Antonio, Austin, El Paso and Dallas,  also penalizes law enforcement and local government entities if they refuse to cooperate with federal immigration agents or even disparage the law.

Critics of the bill, including the Mexican American Legal Defense and Education Fund and police chiefs of Texas’ largest cities, say SB4 will result in racial profiling.

”This sanctuary law is just demagoguery. It has nothing to do with keeping people safe,” said Charlie Gonzalez. “No one is going to argue that if someone is committing a serious crime that they should be arrested.  The issue with that is, if you have brown skin or if you look a certain way, someone is going to be asking about your legal status that they would never ask someone else that would have lighter skin or maybe not a Spanish surname . . .  People are kidding themselves to think that it's not going to be abused," he said.

When Henry B. Gonzalez, the son of immigrants, was reproached for his progressive views on immigration in the 1970s, he responded with a history lesson on U.S. values, Van Hay said.  In a letter found in Gonzalez’s personal files, she said, a constituent thanked Gonzalez for the lesson: “America owes its greatness to her immigrants.”

Charlie Gonzalez said he hopes people view his father as someone advocating on the behalf of everyone.  “He saw his job to make the system work for all people,” Gonzalez said.  “It was such an incredible sacrifice on part of the family — my brothers, sisters, mom — that I would like to think that the fruits of his labor were worth it. The only way it’s (the effort) worth it is if it continues to inspire people and remind people of what needs to be done.” 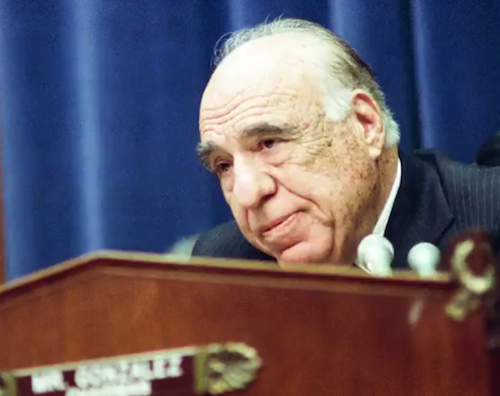