Updated: NOWCastSA has created an interactive graphic that lets you compare regulations on Transportation Network Companies (TNCs), such as Uber and Lyft in San Antonio, Houston, Austin and Dallas.

This updated graphic shows how San Antonio changed its regulations after Uber and Lyft complained the rules were too strict here compared to other cities.

Soon after Uber and Lyft began operating in San Antonio in 2014, the city issued a cease and desist order. In December, 2014, the San Antonio City Council adopted rules that would legalize the TNCs in the city under Chapter 33 of the city code governing Ground Transportation. (Here is a link to that interactive graphic to compare rules governing TNCs to those governing taxis, limousines and pedicabs.)

Those rules were to go into effect on March 1, but after Uber and Lyft complained and threatened to leave San Antonio. Mayor Ivy Taylor asked that implementation be delayed until March 5, when the city council meets to revisit the proposed regulations.

This graphic compares the 18 most common rules and is interactive, so you can click on any data point to see the language in each city's code and then click on the link on each regulation to go directly to the source of the information. 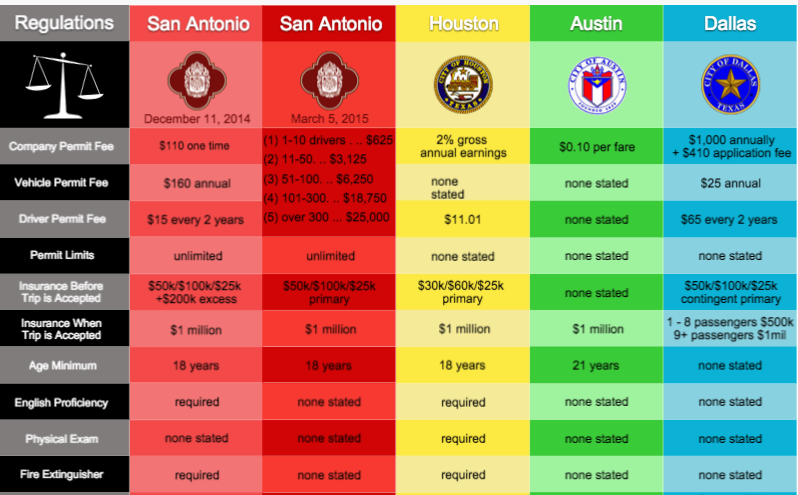