San Antonio has embarked on an ambitious effort to make the city a more bike-friendly place. And city planners want your ideas.

The department recently unveiled a local bike plan interactive map, which is being used to help connect both the city and cyclists with areas that need to be improved to create a more bike-friendly city. Since it was unveiled, the map has received more than 200 updates, ranging from comments to map plots, indicating which routes need a bike lane, what areas have uncomfortable traffic, difficult intersection points, and more.

Over the last 15 months the City of San Antonio’s Office of Environmental Policy’s Sustainable Transportation department has been busy promoting multiple initiatives with its bicycle and pedestrian program.

The City’s Office of Environmental Policy launched the Get Cyched campaign to promote bicycling safety by educating residents about the rules of the road. The launch was held in conjunction with the Hays Street Bridge re-opening.

The overall Bike Master Plan Update and Implementation plan is open for input. The next public meeting on the plan is scheduled for Oct. 13, and officials are hoping to get more ideas about cycling needs and opportunities in San Antonio.

“People are happy our city is providing choices,” Diana said. “We’re making a lot of progress.” 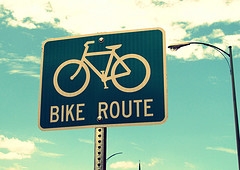