By an 8 to 3 vote, the San Antonio City Council approved its $2.2 billion budget Thursday, with a few amendments made after multiple public hearings and ongoing debates.

The first item listed under the heading, "Expenditure Adjustments," had a special significance for me:

"Add resources to fully restore staff to Music program to Parks and Recreation Department rather than using contract services - $144,997"

They'd won. I'd first heard the program's supporters at the District 6 public hearing, where parents and students pleaded that the city keep full-time staff instead of contracting out for music instructors. In all, the group made passionate appeals at each of the 11 budget hearings over a period of weeks.

At NOWCastSA, we reported last week that the program would be saved. But Thursday's session was the final and official hurdle.

Those fighting to save the music can thank both the stifling heat and their fellow residents for spending more money this summer. The budget got a last minute boost of $1.83 million through an estimate of CPS Energy billings in August. Another $134,347 addition came from re-estimating August sales tax revenue.

Somehow, I don't think it mattered much to the families just how that money was found.

At each hearing I attended, I saw parents and students talk about meeting new people, learning new music they never thought they'd play and learning new skills on their instruments.

Each time I heard them speak, I thought about the lost opportunity for me and my colleagues: This would have been a perfect NOWCastSA kind of story. One of our videographers would have unique visuals of people playing instruments and I'd probably work up a Google map of the various locations to embed along with the copy.

Internally, I made note of the program.

"I wonder if Google Maps has a little icon of a musical note," I said to myself. "If only the program wouldn't be gone in a few weeks."

Asked whether she thought the program would survive the budget cuts, Irene Berns was blunt.

"Not one chance in a million," she told me.

But she tried anyway. "I had to try because my daughter pushed me and pushed me. It's her life. It became my life, it became a lot of people's lives. And honestly, if we hadn't attended the District 1 meeting ... that just made the difference.

Berns was one of several parents who described how the music program helped their children. She said her daughter, Samantha, was devastated at the news that the program she'd learned so much from would be eliminated.

Another mother, Irma Valdez, also spoke at many of the hearings, describing the accomplishments of her son, Richard, and his prowess on multiple instruments, but especially the keyboards, which he played as part the  "Take Note" musical group. Valdez spoke of all the gigs the band would play, and all the shows they wouldn't play, now that the funding for full-time staff was on the chopping block. Richard Valdez is pictured above with Irene Berns as they made their case at the District 1 hearing.

Of course, the music program wasn't the only expenditure cut or revenue adjustment people spoke out about. At two meetings, I saw people speaking about the quality of equipment for the city's Public Access television channel.

One of the first speakers at the District 1 hearing at TriPoint's Grantham Auditorium, "Rocket" Ron Hernandez, had previously worked side-by-side with NOWCastSA to ensure all the video and visual elements at Luminaria would be projected properly on the outside wall of the Institute of Texan Cultures. I also worked with Ron when I was an intern at KENS-TV while in high school.

Hernandez, host of "Drop The Beat" on PATV, asked the city to consider either increasing funding or diverting some of the funds paid by Time Warner Cable to the PATV equipment and studio budget, citing a similar agreement in Austin that led to top-quality facilities. Other PATV hosts and production staff made similar arguments at other meetings.

During the 11 meetings, people also talked about the need for better sidewalks in their neighborhoods, beautifying parks, how Animal Care Services should use its budget and more. At nearly every meeting, representatives from Big Brothers Big Sisters of South Texas, the Girl Scouts of Southwest Texas, the Family Service Association and others thanked the city for its continued financial and general support.

And yes, the people hotly debated a projected $300,000 item in the budget to fund health benefits for domestic partners of city employees. Boy, did they debate.

Some people will have ended this budget process happy, some won't be.

And for some, it's not over - they favor a legal challenge to the now-passed domestic partner benefits plan, or want to vote out councilmembers who approved of the measure.

The students and their parents have a new appreciation that their voices were heard, and that their words made a difference.

City Manager Sheryl Sculley told Berns during one of the last budget hearings that Sculley herself would write the amendment to continue full funding of the music program. Berns went on to thank the entire council and city staff for bearing with them as they pleaded their case. She made the same request late Thursday.

Starting Saturday, Oct. 1, the music program will continue, even if it's yet to be reflected on the city's website as of Friday morning.

For Councilman Bernal, himself a musician, the effort to save the instruction program was one he had to consider.

"I think it's very important." Bernal said after the council approved the budget.

The hearings, he said, "are an opportunity for us to hear from people that we might not otherwise have a chance to hear from. Their passion, their committment and of course, it was (Berns) and the students saying the same things, the same way, that convinced me the program meant a great deal to them.

"Certainly, it was worthy of us re-examining it." 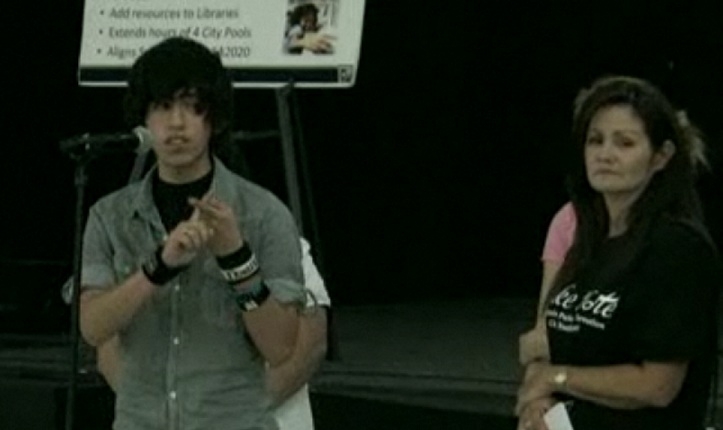