You can fight city hall and win.

A grassroots campaign by students and their parents convinced San Antonio officials to restore funding for a music program that was to have been cut from the 2012 budget.

San Antonio District 1 City Councilman Diego Bernal confirmed Wednesday that funding for the San Antonio Parks and Recreation's music program will be reinstated in the budget after the young people and their parents made passionate presentations at all 11 public budget hearings in each council district and reinforced their campaign on Facebook.

Parent and campaign organizer Irene Berns said she burst into joyful tears when city officials told her during a City Council "B session" the program had been saved and would be a part of the budget up for approval by the City Council on Thursday, Sept. 15.

"Councilman Diego Bernal gave me a big hug and City Manager (Sheryl) Sculley told me she was writing the budget amendment herself to include full funding for our program with all of our teachers and 'Take Note' support," Berns wrote in an email. "Of course, I almost fell over. I was shaking so badly and thanked all of them very tearfully."

In an opinion article for NOWCastSA published here, Berns wrote: "My daughter Samantha is in sax, piano and keyboards. We have been in the city music programs for six years and we are heartbroken that classes will not resume next week. I have started a 'Save the San Antonio Parks and Recreation Music Program' campaign and I'm asking for your help."

The previous proposal would have removed full-time instructors from the program and brought in contract employees to teach.

Students and parents said they believed contract employees would not be able to provide the same level of instruction as the full-time teachers. The proposed cuts also would have eliminated "Take Note," a band comprised solely of students that plays across the city.

Berns asked for all who spoke and wrote to city officials to now thank those who listened and helped save the program. The program will resume at the beginning of October, said Berns. 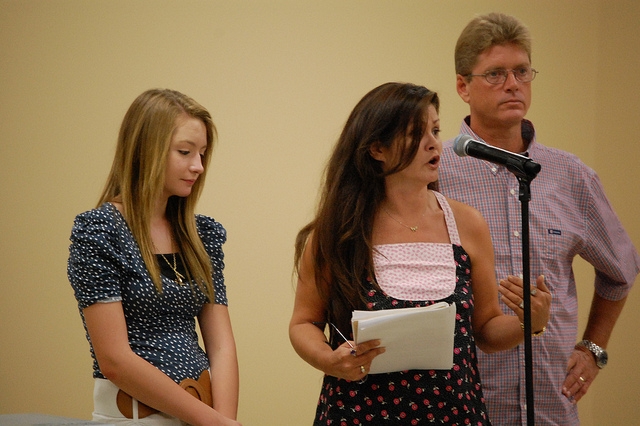