After months of public forums, surveys and input from people who care about San Antonio, a draft report of the SA 2020 plan was released Sunday morning by the Jacksonville Community Council Inc.

"The enthusiasm and community spirit of the citizens of San Antonio was extraordinary and levels of participation eclipsed anything we have seen in 35 years of facilitating such work," wrote JCCI Executive Director Charles R. Cramer in the report's cover letter to Mayor Julian Castro.

From that community input, the draft report distilled vision statements in 11 areas, identified by residents:

Here's the draft final report, available in a PDF.

The SA2020 process, initiated by Castro's office, was designed to set a vision for San Antonio in the year 2020. JCCI was hired to facilitate the process that included monthly community meetings, from September to January. The work was guided by a Steering Committee of 22 people representing the public, private, and non-profit
sectors and three Tri-Chairs: Rackspace Hosting Chairman and CEP Graham Weston; Pearl Brewery CEO Darryl Bird, and Sonia Rodriguez, an attorney and Chair of the Mayor’s Commission on the Status of Women in San Antonio.

Between 800 and 1,000 people attended the meetings in person. NOWCastSA provided an hours-long Webcast of each meeting, and about 1,000 different people participated live online, according to our Google Analytics. Hundreds of people watched video of the meetings after the event.

You can see all of the video from the SA2020, along with our interviews with Byrd, Weston, Rodriguez and SA2020 facilitotor Ben Warner.

Let us know what you think of the report in the comments section next to this article. 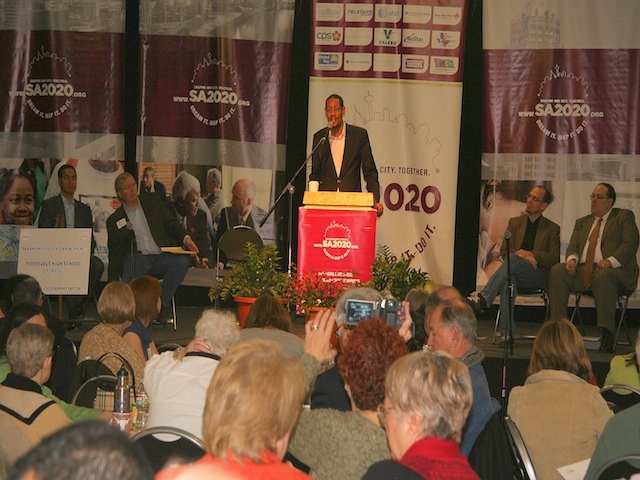