The Texas Tribune reports blame is going all around the Texas Capitol, whether it be to Senate or House members, from others within the statehouse. Gov. Rick Perry has not said anything about calling for a second special session.

About 100 people gathered outside the Grand Hyatt hotel in San Antonio Thursday, June 23, 2011 to protest Gov. Rick Perry's support of of a bill they say is anti-Hispanic, as Perry spoke inside the hotel to the National Association of Latino Elected Officials.

The crowd chanted, carried signs and draped nearby buildings with banners protesting the so-called sanctuary cities bill that passed Texas Senate Wednesday morning and is headed for the Texas House, which approved a similar mesure during the regular session.

If enacted, the bill would deny funding to any city that forbids peace officers from inquiring into the status of a person arrested or detained during a crime investigation. Critics say the bill will lead to discrimination against Hispanics and police chiefs tesitified against it, saying it would be costly and could frighten crime victims from coming forward.

Watch a slideshow of photographs from the protest here:

During the regular session of the Texas Legislature, Perry declared the sanctuary cities bill an "emergency" item, and then he put the bill on the agenda for the special session.

Protesters Thursday said they were upset that Perry, who is considering a campaign for the Republican nomination for President, was speaking to a group of Hispanic officials despite his support of a bill they believe targets Hispanics and his calls for greater crackdown on the border with Mexico.

“Those bills would only be hurtful to our communities. Not only the Latino community, but all the immigrant communities,” said Claudia Sanchez, a member of LULAC.

“It seems that politicians nowadays go to sleep at night, wake up in the morning to see how they can destroy the fabric of the immigrant families and people who look and sound foreign in this country,” said Jaime Martinez, the CEO and founder of the Cesar E. Chavez Legacy and Educational Foundation.

At the outset of the demonstration, Martinez and others attempted to enter the Grand Hyatt to deliver their message to Perry, but they were turned away by hotel security and San Antonio police. Protesters and police officers were generally cordial with each other throughout the event and there were no arrests.

According to a report by the Texas Tribune, Perry did not mention immigration reform or the border during his remarks to the NALEO attendees inside the hotel. 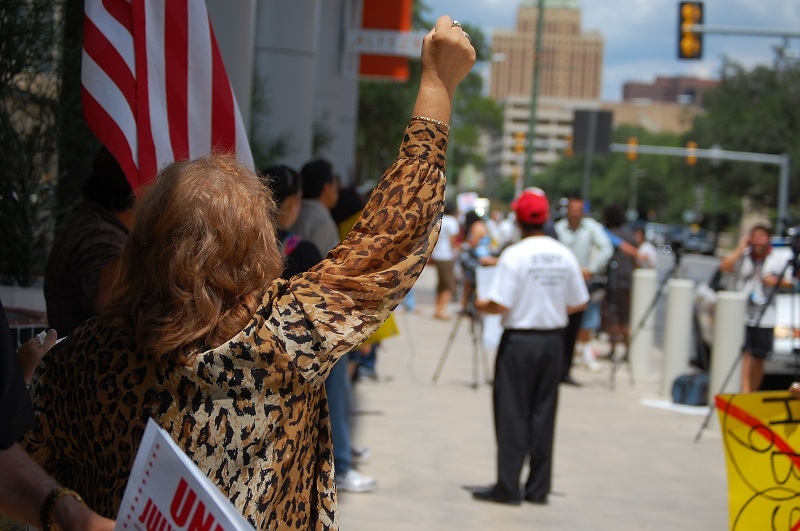