NOWCastSA webcast live as the SA2020 final report made its debut at a public party, barbecue and rally on the Bill Miller Plaza of the UTSA Downtown Campus.

Besides Mayor Julian Castro and SA2020 tri-chairs Graham Weston, Sonia Rodriguez and Daryl Byrd, the event featured many partners who have agreed to carry out parts of the community's vision for the year 2020.

The video below is of the live webcast, from the morning news conference through the public presentation. The two hour and 28 minute video concludes with interviews of newly named SA2020 committee chairs Carri Baker Wells and Tessa Martinez Pollack by NOWCastSA Managing Director Charlotte-Anne Lucas.

A barbecue lunch was served immediately after the presentation. Several hundred people attended the celebration

The SA2020 process, initiated by Castro's office, was designed to set a vision for San Antonio in the year 2020. The Jacksonville Community Council Inc., was hired to facilitate the process that included monthly community meetings, from September to January. The work was guided by a Steering Committee of 22 people representing the public, private, and non-profit sectors and three Tri-Chairs: Rackspace Hosting Chairman and CEO Graham Weston; Pearl Brewery CEO Darryl Bird, and Sonia Rodriguez, an attorney and Chair of the Mayor’s Commission on the Status of Women in San Antonio.

Between 800 and 1,000 people attended the meetings in person. NOWCastSA provided an hours-long Webcast of each meeting, and about 1,000 different individuals participated live online, according to our Google Analytics. Hundreds of people watched video of the meetings after the event.

You can see all of the NOWCastSA video from the SA2020 sessions, along with our interviews with Byrd, Weston, Rodriguez and SA2020 facilitator Ben Warner. 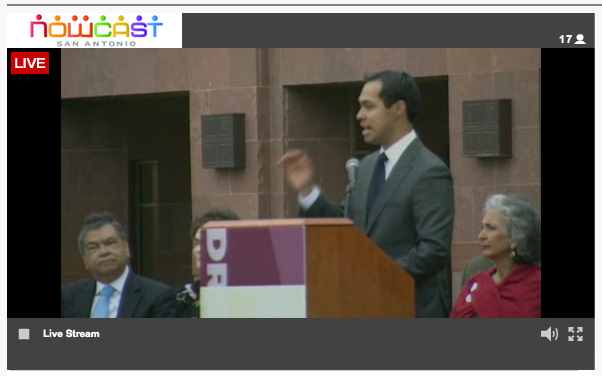