When civil rights leader and social activist Julian Bond died recently, the New York Times referred to him as a “persistent opponent of the stubborn remnants of white supremacy.” President Barack Obama called Bond a friend and a hero. "Justice and equality was the mission that spanned his life,” Obama said.

While Julian Bond was a legendary figure beginning in the 1960s, some young people may have no idea who he is or how his life relates to the #blacklivesmatters movement.

In this video, North East School of Arts High School Senior Kayla Wilson interviews local publisher Fred Williams, a black history professor who knew Julian Bond. Among other things, she learned what Bond was doing when he was her age. Watch the video, then scroll down for poetry, video, essays and more:

This article has been updated with poetry, essays, video and links to more information:

President Obama issued a statement Aug. 16, 2015 calling Julian Bond “a hero and, I’m privileged to say, a friend. Justice and equality was the mission that spanned his life. Julian Bond helped change this country for the better. And what better way to be remembered than that.” Read that statement here.

Bond was co-founder of the Student Nonviolent Coordinating Committee, was chairman of the National Association for the Advancement of Colored People (NAACP) and was co-founder and first president of the Southern Poverty Law Center.

As Ari Berman of The Nation recalls in this essay, "the fight for voting rights was always a key cause for Julian Bond over his distinguished life." Berman recalls Bond's words after the 2010 election: “I was naïve to think voting rights were untouchable,” Bond responded. “I didn’t dream that Republicans would be as bold and as racist as they are.”

After former President George W. Bush made his first speech to the NAACP in July 2006, Stephen Cobert had Julian Bond on the program to talk about the speech. Bond talked about what he did and did not like in the speech and responded with humor to Cobert's request that Bond be his new black friend. Watch that video at this link.

Bond believed that gay and lesbian rights are a natural extension of civil rights. Watch him explain that in this 2012 video interview with Anderson Cooper.

Activist and author Vann R. Newkirk II recalls Julian Bond speaking to his class at Morehouse College in 2009 and writes in this essay #BlackLivesMatter has the "fire and thunder that Bond extolled."

More on the racial divide in this essay by Norman Lear: Mourning in America.

In a new civil rights era, there is much to learn from Julian Bond, writes Tanya Odom in this essay on CNN. 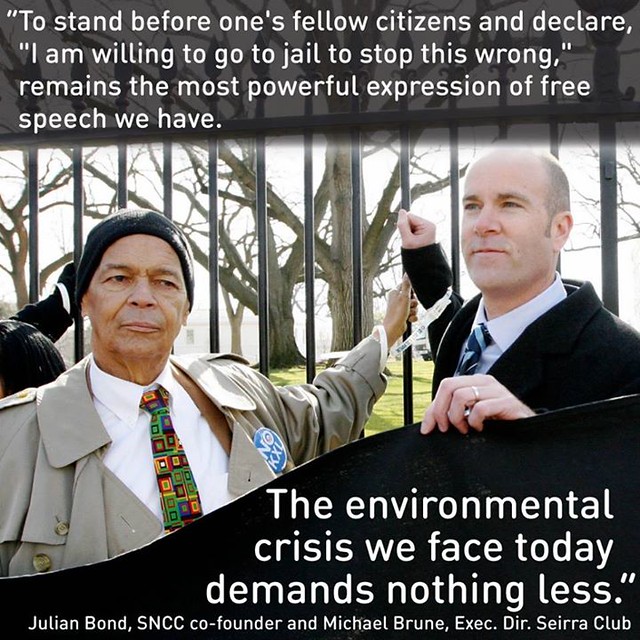 In 2013, Bond was among the Climate Change activists arrested at the White House protesting the Keystone Pipeline.

Among the 48 arrested with him were Michael Brune, executive director of the Sierra Club and Bill McKibben, founder of 350.org. Click on the image to the left or go to this link for more from the environmental groups.

Reflections on Julian Bond, an essay by Theodore M. Shaw, professor and  Director of the Center for Civil Rights, University of North Carolina School of Law. Also, a link to W.E.B. DuBois’ Credo, which Julian Bond quoted from. 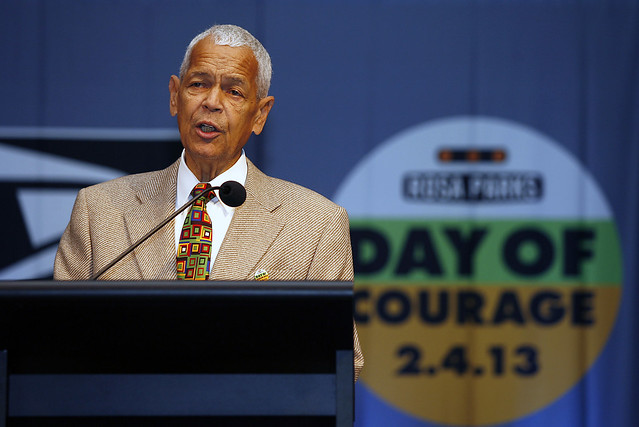 The photo to the right is of Julian Bond giving the keynote speech on the National Day of Courage in 2013 on the day that would have been Rosa Parks' 100th birthday. Click on the image or here for more.

Here is a link to the New York Times obituary.

Inside the Civil Rights Movement: A Conversation with Julian Bond by Eric Mann in the Huffington Post.

In this video from a 1967 interview at the Center for Pacific Northwest Studies, Western Washington University,  Julian Bond talks about the connection between U.S. aggression in Vietnam and its treatment of minorities at home.

For more quotes from Julian bond, click on the image below or go to the Julian Bond page here at azquotes.com.

Editors note: Please ask us to add additional resources to this page by emailing news@nowcastsa.org 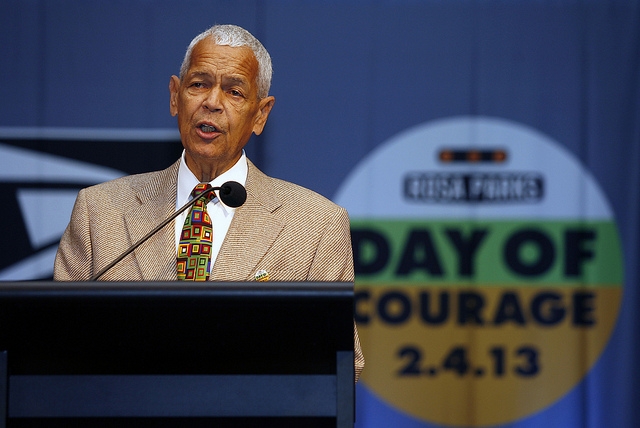