"The people united will never be divided!"

Those were just some of the chants that could be heard in downtown San Antonio on Labor Day morning, Sept. 5, 2016. Hundreds of union members, labor activists and local leaders took to the streets to celebrate a defining moment in the labor movement from 50 years ago. 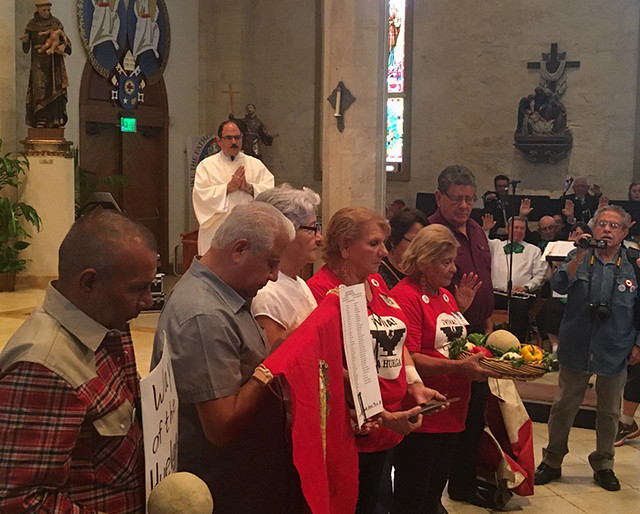 It was in the summer of the 1966 when melon farm workers in Starr County, deep in the Rio Grande Valley, mounted a strike for better wages and improved field conditions.

The workers then marched through the Valley, to Corpus Christi, through San Antonio, and finally arriving in Austin on Labor Day. Texas officials made no immediate concessions to the workers' demands, but things improved over the following decades.

However, the strike - or "huelga" and march - or "marcha" - have left a lasting impression for labor supporters who say their contemporary struggle is not over.

The strike and march was commemorated in San Antonio on Monday first with a Mass at San Fernando Cathedral, led by the Most Rev. Gustavo García-Siller. It's where Archbishop Robert Lucey celebrated mass for the marching farm workers when they arrived in San Antonio on Aug. 27, 1966.

A handful of those same workers who were able to attend Monday's local proceedings got a front row seat at the Mass, surrounded by labor activists and supporters. The bilingual Mass was a mix of formal prayer, readings and singing of traditional union songs.

There was much talk from clergy and readers at the Mass of how human "selfishness" has over the centuries marred the careful "cultivation" of the earth and how people care for each other. However, clergy added, God's sense of justice and right has never wavered, and that the faith has greatly helped those who fight for fairness and a better life.

García-Siller said the diverse crowd at the Mass demonstrated how different people have banded together to say the struggle carries on. He referenced Mother Theresa, just canonized by Pope Francis, who "consistently served" the people on a mission of mercy and justice.

"Pope Francis reminds us, as we look to the future, whoever does not face challenges - whoever does not take challenges - is not living," said the archbishop. García-Siller said the strikers/marchers from Starr County risked their jobs - and more than that - as they could not face lowly wages and conditions, such as no toilets out in the melon fields.

A few of those same workers spoke at a rally at Milam Park, following a short march from the cathedral.  With union flags, banners and signs in hand, hundreds of labor activists shouted that the struggle for the rights of workers to strengthen their own families and communities is not over.

Three marchers from 1966 - Guadalupe Guzman, Dora Vela Garza and Efrain Carrera spoke at the park, mostly in Spanish, recalling the conditions from their time in the fields. They recalled enduring the elements, threats from their bosses, and arrests and beatings from law enforcement during their protests. But the 1966 workers at the San Antonio rally lacked neither the fire nor the commitment toward justice for all laborers.

Carrera explained meeting one man who could not understand the fuss behind the 1966 strike and march. The man called Carrera - and by extension his contemporaries - "trouble and a lazy bastard."

"These people walked to Austin," Carrera recalled telling the man. "They didn't fly, they didn't drive to Austin. So, James, who are the lazy bastards?"

Carrera then asked Congressman Doggett to address the lack of enforcement of federal rules regarding modern bathroom facilities in the farms across the Valley. He added that bathroom conditions for today's field workers are little better than they were 50 years ago.

"What we need is somebody, or a lot of people, out in the fields and making sure that there are toilets out there. Because can you imagine your own daughter or grandchild having to squat down?" Carrera said.

Doggett replied he had checked with the Occupational Safety and Health Administration, and found that there had been only two enforcement actions statewide in the last three years in relation to outdoor bathroom access for farm workers.

"So we do need to redo this struggle. So much of this is because we can't get adequately funding for this agency, which is also responsible for construction safety," Doggett said, adding he will pursue the issue.

Doggett and many others at the rally praised the 1966 huelguistas and peregrinos (pilgrims) for setting an example and inspiring generations toward activism.

Senator Menendez presented the workers with a legislative resolution that formally recognizes their actions.

Reading the resolution, Menendez said the march and strike was a turning point in the Latino movement for economic justice and civil rights.

"The courage and determination of the protesters remain a source of inspiration today," he added from the resolution.

Aimee Villarreal, an assistant professor of Mexican-American studies at Our Lady of the Lake University said it is important to remember and celebrate what these protesting workers did 50 years ago. She said the Texas Historical Commission will erect a historical marker in Starr County to commemorate the strike and march. She and others at the rally said they hope the city of San Antonio will do the same. Other communities along the march route do plan a similar act.

"Under extreme conditions and deprivation, the workers left to us a political and social harvest that we now reap, the legacies upon which we now build," she added."

Famed labor leaders Cesar Chavez and Dolores Huerta, with their organizational resources, helped to support what was happening in the Rio Grande Valley in the mid-1960s. Paul Chavez, one of Cesar's sons, came to San Antonio on Monday. He said this week's celebration of 1966 was a celebration of other social justice leaders that his father admired, who have gone "unnoticed and unrecognized."

Esmeralda Rodriguez of Communities Organized for Public Service, C.O.P.S/Metro Alliance, said this week's celebration could not be just about labor leaders and victories of the past, but about supporting today's workers in their struggle "for dignity, to have economic security for their families." COPS/Metro Alliance managed even Trevino and Viagran to openly renew their pledge of support on council for raising the minimum wage of the entry city employees.

"Alternately, it's a very noble cause that we're still fighting today. We really want to change the hearts and minds of many folks to provide dignity for all," he added. 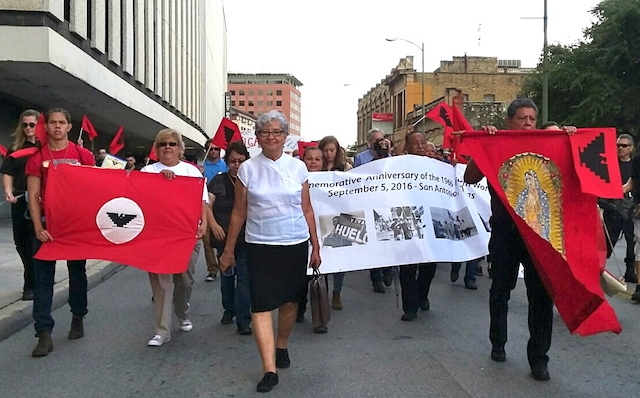