La Printeria: Art as a Catalyst for Economic Development in San Antonio's Westside

Harvey Mireles stood in a Westside bakery, staring at the pan dulce, when the name for his new initiative, a nonprofit focused on the art of printmaking, hit him faster than a whiff of a fresh concha. “This is a panedería,” he thought. “Why can't there be a printería?”

La Printería, a community resource for artists with a focus on printmaking, was born just as Mireles was setting up his own print studio behind his home. Recently, I sat down with Mireles in his home studio and asked him what sets La Printería apart from other printmaking studios in the area.

View a few photos from La Printeria here in this gallery.

But building a nonprofit from the ground up is a challenging task for any individual so I asked Mireles where he found his inspiration.

Mireles met Manny Castillo (q.e.p.d.) in 1995 while home on leave from the Air Force.

“Chanclas were the attire with Manny,” Mireles remembered. Castillo died of cancer in 2009. He is deeply revered for his work as a Chicano art advocate and was the founding Executive Director of San Anto Cultural Arts. Castillo inspired Mireles to be active in Latino arts.

“Manny said to me, 'One day I'm going to have my own nonprofit.'” Castillo's directive resonated with Mireles and the idea stuck.

“What a creative thing to do,” Mireles said. “To start your own arts initiative and have that be your life.”

Castillo inspired a community of artists and activists to invest in the Westside community. Mireles would continue this Westside arts connection, eventually serving as the Executive Director of San Anto Cultural Arts for about two years.

“I was inspired by the San Anto staff: Mari Hernandez, John Medina, and others, all the creatives that come around San Anto,” he said.

Mireles claims a birthright to San Anto Westside tierra. “I grew up in Las Palmas,” he said. “I went to Edgewood Junior High, Kennedy High School; I was a teenager in the 70s.”

Mireles dropped out of high school, but eventually earned his GED and enlisted in the Air Force: “The educational environment doesn't seem to have changed much in that part of town. Time is standing still. I see the social issues that confront the Westside. My mission is to help my community.”

“I received a call from Leonard Rodriguez from the Westside Development Corporation. He asked me if I was pursuing the printmaking idea. He said, 'EISD, WETC and WDC have partnered to bring economic development and training to the Westside. We're looking for a component, and we think art is that component.'”

At that point, Mireles wasn't sure what direction to take La Printería: should it be a dot com, a commercial enterprise, a collective, a co-op, or a nonprofit. After the several meetings with stakeholders from each organization, Mireles took the nonprofit direction. The WDC currently serves as their fiscal sponsor.

Mireles found overwhelming support from artists. “I'm getting validation that La Printería is something the community needed. We want to appeal to the city,” he said. “Chicano arts is at the core, but it is open to all artists.”

Mireles envisions several key programs when La Printeria is fully operational. One of the goals of La Printería is to create master printmakers. Another is to offer a mobile studio.

“You can't just expect students to come into the door,” Mireles said. “You have to go to where they are.”

Other programs include serigraph services to artists, artist workshops and exhibits, plus the opportunity for artists to utilize La Printería's equipment on a rental basis. At the core of La Printería is printmaking as an economic tool. Apprentices aged 12 to 19 years old will work to acquire t-shirt printing skills and will have opportunities to learn other forms of printmaking; working artists will use La Printería's equipment as a means of sustaining their work.

La Printería aims to build a studio that supports multiple methods of printmaking. Mireles wants artists to have the tools to create a lithograph, a relief work, etchings, silkscreens –so that any artist interested in any aspect of printmaking can come to La Printería and work.

Mireles repeated the mantra: “I never want to say no to an artist” to a circle of artists at his first Community Meeting in the space on September 4, weeks ahead of “Noche Buena,” a grand opening exhibit happening later this month.

Gloria Sanchez Hart participated in that community meeting, along with Roy Villarreal, Viktoria Valenzuela, Jacinto Guevara, and others. Sanchez Hart is a 66 year-old artist who wants to leave a legacy in printmaking. She has an MFA from the University of Guanajuato from San Miguel Del Allende. She's been living in San Antonio since 1989.

“I want to share my experience as a printmaker,” she said. “This is why I am here.”

“Noche Buena: A One-Night Exhibit at Galería 237”
Presented by the Alamo Colleges Westside Education and Training Center (WETC) and the Westside Development Corporation in collaboration with La Printería

This event is free and open to the public. Please RSVP to Info@WestsideDevCorp.com 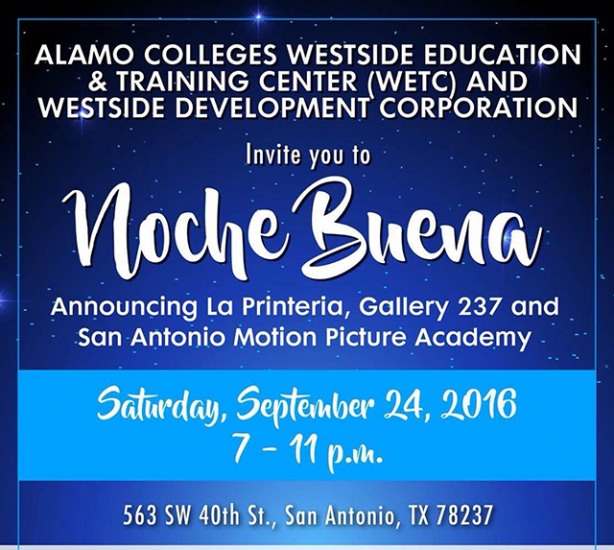