They urged the Republican to preserve the U.S. Environmental Protection Agency, and to respect scientific research, especially improving air quality and climate change. The group, numbering more than 15 people, also sought an audience with Smith, hoping he'll personally meet with them or hold a townhall on issues such as environmental policy and healthcare.

Moms Clean Air Force, with chapters in 19 states and the District of Columbia, is a community of parents concerned about air pollution's impact on children's health. TX 21 Indivisibles is a grassroots organization of constituents in Smith's district contesting many policy proposals from President Trump's administration and the Republican Congress.

View a photo gallery from the protest below. 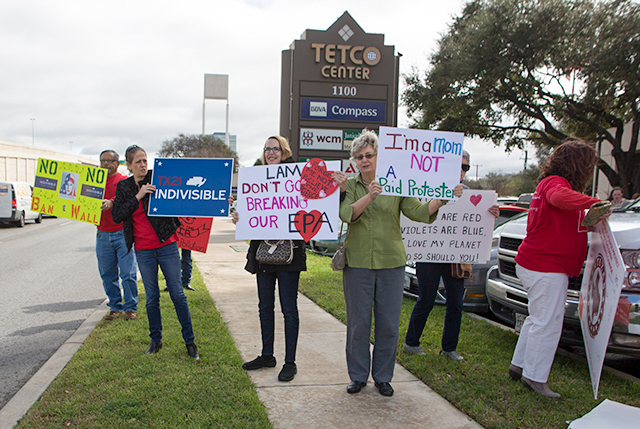 The Valentine's Day event was a peaceful one, as the group first lined up outside of Smith's field office to hold up signs and handmade dozens of strung-up Valentine's cards for passing motorists to see along Northeast Loop 410.

Then the group went up to the Congressman's office to personally deliver their greeting cards and to speak with a staffer. Many of the protesters said they got help from their children and other loved ones to make their cards.

The cards somewhat playfully addressed the protesters' concerns about climate change and other ecological issues. One decorated card, from Krystal Henagan, field consultant for the Texas MCAF chapter, said "I melt for you." The same card went on about how climate change has caused loss of Arctic sea ice three times faster than the gain of ice in the Anarctic.

View a video of the protesters below.

A red heart-shaped card, playfully addressed to Smith, stated: "You're hot because climate change is real." One woman held a sign: "Roses are red, violets are blue, I love my planet and so should you."

Smith chairs the U.S. House Committee on Space, Science, and Technology. He has often been publicly skeptical about science behind climate change, air quality, and how the federal government doles out environmental regulations.

Smith recently chaired one hearing dubbed "Making the EPA Great Again." The 16-term Congressman also has introduced proposed legislation, Secret Science Reform Act, which he and other conservatives say will make the EPA more accountable in the research it conducts and publishes. But environmentalists and similarly concerned observers say it's part of a wider attack on science.

According to a news release from Moms Clean Air Force: "Science is the cornerstone of the Clean Air Act. In order to carry out its statutory responsibilities, the EPA uses high-quality peer reviewed research from trusted, independent, scientific sources. EPA regulations must be science and health-based."

MCAF has worked to make the public aware of how air pollution affects particularly children, and how the increase of greenhouse gases in the atmosphere since the Industrial Revolution compounds matters. According to the Allergy and Asthma Network, 24 million Americans have asthma, including 6 million children. 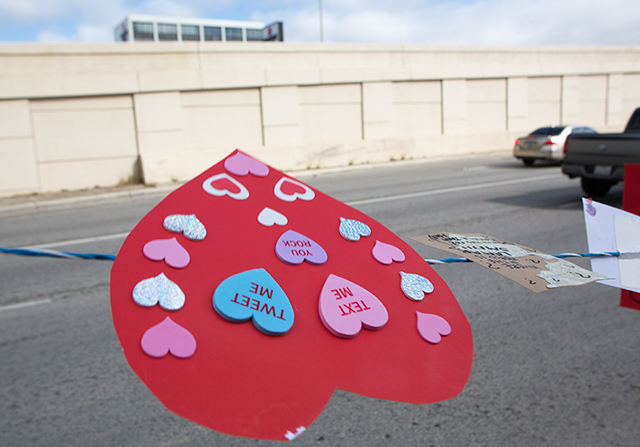 There are worries among environmentalists, and groups such as MCAF, that as long as climate change remains unabated, public health could see further decline, and that issue is compounded by worries over the fate of the Affordable Care Act.

Inside Smith's field office, MCAF member Kelly Dail Trout echoed the sentiment of fellow mothers, that they'd rather spend their day with family or working to help other people than on criticizing their elected representatives. In her work for the International WAGR Syndrome Association, Trout said she is writing a report on chemotherapy and children coping with renal tumors.

Worried that the Trump administration and the GOP Congress may repeal the ACA, or Obamacare, Trout said federal leaders are "hellbent on taking away access to chemo for thousands of children."

"I have a Congressman who doesn't believe in chemo," Trout told Mike Asmus, Smith's district director . "All my work is for nothing if I'm not here doing precisely this to get my representative's attention."

Continuing with concerns about healthcare access, another protester, Tom Wakely, chimed in. Wakely, a Democrat, lost a challenge to Smith in the November 2016 general election. But the Air Force retiree and former minister plans to mount another campaign for Congressional District 21 in 2018.

Wakely told Asmus he takes more than $56,000 worth of medication to deal with Hepatitis C. But he considers himself lucky to pay only $9 a month because of his veterans benefits.

"People are dying because they don't have access to these drugs," he added.

Another mother, Elizabeth Montgomery, said her concerns about climate change and its relation to healthcare became so great that she joined MCAF only a few weeks ago.

But she also expressed frustration to Asmus about how Republicans try to "delegitimize" the increasing number of anti-Trump/Congress protesters, nationwide, by calling them "paid protesters" from other constituencies.

Trout told Asmus she and other protesters were ready to show their driver's license or other ID to prove they do live in Smith's district. One woman carried a sign, stating she was not a paid protester. Some mothers at the Feb. 14 event said they had to pay a babysitter to watch their child so they could visit Smith's office.

"I just want to be listened to at some point so we can move on with our lives and not worry about it," Montgomery said. She and fellow protesters asked Asmus if Smith could personally talk with them soon and/or consider holding a townhall session.

Asmus said all he could do was pass along word to Smith of the protesters' visit, and have them leave a name and contact information at the field office. Before they departed, the protesters left Asmus with a box containing their Valentine's cards and asked his staff to recycle the cards.

"I get the strong sense from thousands of people that there's a great desire for communication," Trout added.

**Cover Image: Protestors stand outside the entrance to the Tetco Building as they unravel Valentine's Day cards for U.S. Rep. Lamar Smith. Photo by B. Kay Richter.