Have you voted yet? If not, you have just one chance left — Election Day is Nov. 5 and the polls close at 7 p.m.

This year’s election is what reporters like to call a “low-profile” election. Which is unfortunate, because I think all elections are important — they are the chance when we get to most directly have a say in how we are governed. There may be no president or governor to vote for, but the nine propositions on Tuesday’s ballot will shape our state’s constitution — and ultimately shape our lives.

I’ve written about this election in previous columns, but I want to take this one last chance to review what’s on the ballot and what you need to know before you vote.

I support all nine propositions, but I think three are particularly important: numbers 1, 4 and 6.
Proposition 1 will create a 100 percent homestead property tax exemption for Gold Star Spouses — survivors who have had a husband or wife killed in action while serving our nation. The exemption amount is established based on the value of the first home where the exemption is applied, provided the Gold Star Spouse has not remarried. The years after losing one’s spouse in combat can be financially brutal, and this will be a deserved easing of that stress.

Proposition 4 will allow a similar exemption for disabled veterans who have been given homes donated by charitable organizations and tailored to their accessibility needs. The level of exemption will be tied to the veteran’s level of disability (i.e. 70 percent exemption for 70 percent disability). This will help prevent the veteran from losing this wonderful gift to foreclosure.

Proposition 6 will take $2 billion from the state’s Rainy Day Fund and loan it to regional authorities for projects authorized by the State Water Plan. This fund will kick-start badly needed water infrastructure projects.
Simply showing up at the polls with your voter registration card is no longer enough under Texas’ new Voter ID law. When you go vote, you’ll need to take one of these seven forms of photo ID:

If you lack one of these forms of ID, VOTE ANYWAY — you’ll need to ask for what’s called a provisional ballot, cast your vote, and then visit the voter registrar’s office within six calendar days of the date of the election and present an acceptable photo ID (or sign an affidavit swearing that you qualify for an exemption) to have the vote counted.

Unlike the Early Voting period, when voters could vote anywhere in the county, voters on Election Day must cast their ballots in their neighborhood precinct. Polls will be open 7am-7pm. If you’re a Bexar County voter, you can find your polling place online at http://elections.bexar.org or by calling 210-335-VOTE. That’s also where you can find information about other ballot items specific to your precinct.

Voters from all over the state can get a wealth of information at http://VoteTexas.gov, including descriptions of the other six propositions and more detailed explanations of the Voter ID law.

No matter what, GO VOTE! So many of our military service members risked their lives and even died for your right to vote — don’t let them down. 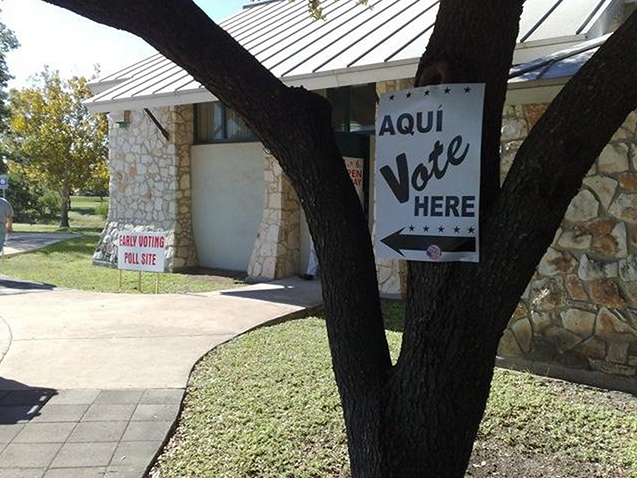