By Regina Mack, The Texas Tribune

Lawmakers in Texas have debated school finance for years, but have so far struggled to come up with a way to reform the way the state funds its public schools.

Conley Johnson said Austin ISD is already operating on an extremely tight budget, and the property taxes shouldered by Austinites are disproportionate compared to other parts of the state. Austin ISD pays more in “recapture” payments than any district in Texas, she said, describing the payments the state collects from “property-rich” districts for distribution to “property-poor” districts.

Conley Johnson said she understands the need to “equalize“ and make sure students across the state have what they need to be successful, but she argued that recapture is an issue that needs to be reformed because components of the school funding formula are outdated and don’t address the current needs of students and school districts.

Is pre-K a priority?

Huberty said the idea of expanding pre-kindergarten became a political issue to him in 2015 when he got pushback from some conservatives for helping to carry through Gov. Greg Abbott’s plan to enhance pre-K programs.

“There were some conservative groups who came after me and called it socialist and Godless, I don’t think anybody’s confused about that,” Huberty said.

What can the Legislature do?

Williams said that while there are certain members of the Legislature who are tuned in to public school finance issues, there are too many members who don’t know what goes on in Texas public schools.

He pointed out that Bernal and Huberty understand school finance reform because they’ve worked with school districts and visited a large number of public schools. But many legislators have not done the same and don’t understand what’s at stake.

Conley Johnson agreed that in many cases she doesn’t see members of the Legislature doing what they need to do to make progress with school finance reform, and there needs to be more of a willingness to put aside personal interests and talk openly about the issues facing public schools.

This article originally appeared in The Texas Tribune at https://www.texastribune.org/2018/05/04/school-finance-reform/. 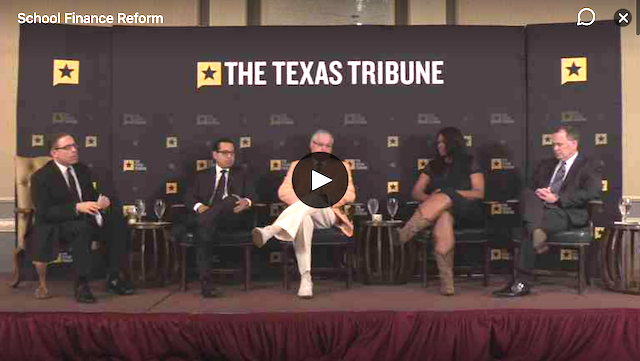