Elaine Wiant, president of the Texas League said, "We are encouraged that two thirds of county websites meet the League's minimum criteria for voter and election information informed citizens need to vote this election season."

However, only one third (82 counties, 35 percent) of the websites provided basic information about the new voter ID requirements, up from one fifth in August.

"Confusion about the new voter ID requirements is being reported at polling places during early voting. Inadequate information on county websites foresaw the potential for confusion," said Wiant.

Finding the election-related information was easy on three fourths (78 percent) of the 234 websites. One hundred and two (44 percent) had a recognizable word or icon on the home page that linked to a page displaying elections information.

Two thirds (149 counties, 65 percent) of county websites now provide voting dates, times, and locations as well as a sample ballot, up from 37 percent in August. And one-third (78 counties) provide election and voter ID information in both English and Spanish, nearly twice as many as in August (40 counties, 17 percent).

Of the 202 official county websites that provide elections information, half (121 counties, 52 percent) improved their overall evaluation score since the first review in August. The number of county websites rated "Outstanding" for providing superb election and voter ID information more than doubled, increasing from 14 to 33. Those rated "Honorable Mention" for their excellent information also more than doubled, from 29 to 66.

Elizabeth Erkel, a vice president of the state League, who oversaw the second review, was pleased, "The improvement in such a short time in the provision of vital voter information in so many local communities speaks to the dedication of county election administrators to our goal of 'Making Democracy Work®."

For this election we reviewed for accessibility and content. In future county website evaluations, we will include the readability level of voting and election information.

The initial report and an update are available on the LWV-Texas website at www.lwvtexas.org/Voter_Rights_Election_Laws.html. Individual county website results are included in an appendix available at the same link. 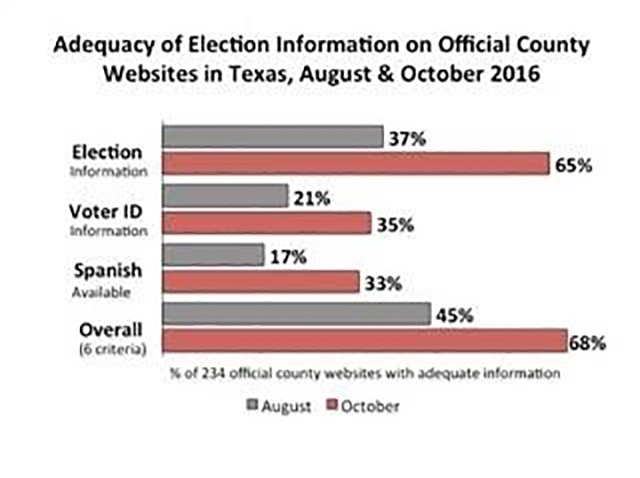 Shared by League of Wome…