On Main Off Main to close after 33 years

It's a weekday afternoon before Christmas at On Main Off Main. Shop co-owners Bill Davis and Oscar Camacho wear festive green holiday sweaters as jazzy Christmas music plays in the background. A small group of college students giggle while browsing the shelves, which are filled with gag gifts and other novelties that have made On Main Off Main a popular enterprise in Monte Vista.

But come Feb. 1, 2017, there will be no more chances at On Main Off Main to snag "Handerpants" ("underpants for your hands"), 3D dog playing cards, fake roaches or a solar-powered figure of a pope waving his hand at visitors. The quirky shop is closing its doors for good after 33 years. Davis and Camacho plan for a liquidation sale to begin Jan. 1.

Until then, longtime customers and friends come into the store to say farewell, and first-time visitors come to see what they've been missing all this time. The holiday season, no doubt, contributes to the uptick in traffic, as it has done each prior year at On Main Off Main.

But to the co-owners, On Main Off Main has been more than just a place that sells chocolates, shirts and socks with humorous slogans, and books exploring the eclectic sides of Texas. It's been a gathering place for many patrons from all walks of life. 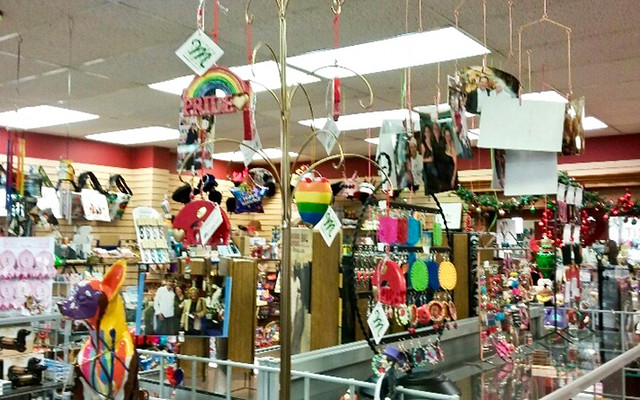 "I thank them for the relationships they’ve helped to create here. The sense of community they helped to keep alive," Camacho said.

Like most other small, independently owned enterprises, On Main Off Main has struggled to keep pace with large retailers and online shopping. Nearly three years ago, Davis and Camacho signed what would be their final lease on the spot at 120 W. Mistletoe, where On Main Off Main has operated for 13 years. The shop was based in a nearby lot - also in Monte Vista - for the previous 20 years.

"We decided the Internet, online shopping, has slowly buried small brick-and-mortar stores," Davis said. "We’ve seen a lot of our manufacturers closing down. It’s been tough."

The final lease gave Davis and Camacho an opt-out at the end of each year. The last two, they decided to stick around to see what happens. Now, they've decided the time has come to close up shop. Even following the 2008 recession, the co-owners mulled shutting things down then.

"But we decided, no, let’s hang on, see if we can weather this storm and we did," Davis said. "But I kept looking over my shoulder, I kept looking back, and it was the Internet."

Acknowledging he himself has never ordered anything online, Davis said many shoppers have gotten used doing business via the Internet.

There’s a whole new customer these days. You have to get yourself in a different mindset," Camacho added. "The gift has to be more electronic. I guess with that, we’ve seen our day, which is unfortunate because a lot of our older customers are mature, frequent customers. They’re the ones who are going to get hit."

In October, Davis and Camacho announced they would be closing their beloved store, much to the chagrin and shock of numerous loyal customers.

"People started coming in, saying 'We can’t believe you’re closing, you can’t do this, you know how long I’ve been coming here?'" Davis recalled. But Davis, at age 74, and Camacho, at age 63, decided this was the "right time" to depart the local retail scene.

Davis said he tells patrons is simply a sign of the times. With rising operating costs, including credit card fees, and fewer people coming into the store, Davis and Camacho found that what was once fun had become stressful.

On Main Off Main has hosted a handful of special events around the year, each year, including a holiday season open house. The final open house, held earlier in December, attracted more than 100 people to the store. But most of the attendees were first-timers.

The co-owners are also selling fixures, such as shelves and even the coffee bar from the back of the store. More than 60 percent of the fixtures have already been pre-paid for later pick-up.

On Main Off Main has had its own website and presence on Facebook. That way, it has remained visible to a generation of consumers raised on the Internet. Many of the Facebook posts have carried a humorous tone.

But all that has not translated into a higher number of patrons coming through the shop doors.

"We’ve used Facebook to our advantage because it’s free," Davis said. "I’ve drilled it into our customers’ head to return to your neighborhood, to your favorite store. Not just us, any store, and shop small."

Davis and Camacho were both in real estate when they decided to open On Main Off Main in 1983. They were mostly spurred on by the strength of selling alternative and unique greeting cards. The business grew from there. The store includes, even now, a back room containing more adult-oriented gifts and novelties.

Davis recalled how, years ago, customers could ask to see the risque greeting cards for sale. The cards were displayed in a folder. The patron would give to the clerk a number or two corresponding to the desired card(s) prior to purchase.

"As time progressed, that wasn’t the trend. It’s all out there. You go into Hallmark, you can see some pretty racy cards," Davis said.

On Main Off Main has also, over the decades, embraced members of the local LGBTQ community. The store has often received positive reviews from the community, including online vehicles such as Yelp.

"(Support has) been strong but we’ve also seen it fall by the wayside," Davis said.

Marina Douenat has been a loyal customer of On Main Off Main since she moved to Monte Vista more than 20 years ago. On this particular weekday, she walked way with an impressive haul of merchandise. She said she will miss the store and its owners.

"There are a lot of cards that are very unique. It also has an LGBT section. I’m gay, so it’s good to be able to buy from there, and yes, there’s a lot of whimsical things you can’t find in any other store," Douenat said. "It’s going to be hard to find another place like this."

Douenat also noted the shop's offerings have long included those created by local artists, artisans, authors and other creatives.

"There’s nothing else around that has the unique nature of these gifts. It’s really sad that they’re closing but I’m grateful they’ve been here so long," she added.

"You get into business to make money. We haven't made money in a long time. We stayed here, I guess, out of obligation," Davis said.

Davis and Camacho's welcoming, light-hearted attitude has extended to employees. Years ago, On Main Off Main had as many as five employees. Now, one - Monica Lozano - remains. She works part-time as a Bexar County Sheriff's Office dispatcher. Lozano said she will miss working at the shop.

What will Camacho and Davis do after they lock up On Main Off Main for a final time? They're not sure, but they feel traveling will be on the agenda.

"I want to thank all of our devoted shoppers and thank them for all of the years they’ve managed to put up with ur lunacy and helped to create the monster that this. This is a living, breathing thing. We get so much from customers who are sorry to see us go," said Camacho.

"We were part of the fabric of San Antonio, part of the city that’s being lost," he added.

Davis' parting words are simpler: "Return to your neighborhoods and shop small."

**Cover Image: Oscar Camacho, Monica Lozano, and Bill Davis pose for a quick photo at their store On Main, Off Main which plans to close in February of 2017. Photo by Edmond Ortiz. 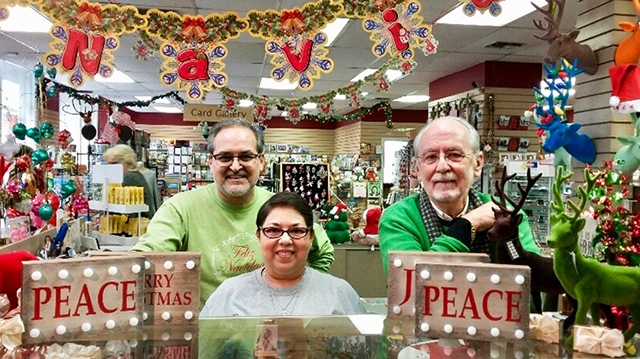