A team of four students from Dr. Yongmei Lu’s Geographic Information Science class at Texas State University (TSU), working with the Greater Edwards Aquifer Alliance (GEAA), have created a map of sewage leaks within the Edwards Aquifer Region. The interactive map, part of on-going research that GEAA is conducting to determine the impact of sewage on the Edwards Aquifer, displays detailed information about all documented sewage leaks that occurred during the past eight years within Texas Commission for Environmental Quality’s Region 13 in South Central Texas.

The interactive maps, which display location, date, volume, and cause of spills, can be viewed by the public here on this page, and you can learn more about the map-making project on by clicking here.  Among the findings of this study is that between 2008 and May 2012 eighty three sewage spills totaling 809,000 gallons (or 2.5 acre feet) of raw sewage occurred on the Edwards Aquifer Recharge Zone.  Because the Edwards Aquifer does not filter surface runoff on the Recharge Zone, this is cause for concern.  Additionally, many of the leaks were in close proximity to streams and creeks, where recharge of the aquifer is most likely to occur.

The TSU students worked with a team of experts from GEAA’s Technical Advisory Team who are researching the Impact of On Site Sewage Facilities (septic tanks) vs. Organized Sewage Collection Systems on the Edwards Aquifer Recharge Zone.  TSU Team member and GIS Analyst for the project, Amy Woods, noted that “We used GIS to spatially look at the distribution of spills that occurred over the Edwards Aquifer. It was amazing to see a list in Excel go from just a bunch of words with no meaning to a visual representation which can be used to really give the public a greater understanding of the quantity and volume of spills that occur in such an ecologically sensitive area.”

Click on the image below to view interactive map.

The research is part of an on-going partnership with TSU; this semester, a new team of TSU students is mapping sewage leak data from TCEQ Region 11.  GEAA’s goal is to produce a White Paper that will examine all aspects of regulation of sewage within the Edwards Aquifer Recharge Zone, including an overview and assessment of current regulatory and agency practices, recommendations for improvements, and estimates of leakage that might determine which methods of sewage disposal pose the greatest threat to the Edwards Aquifer. 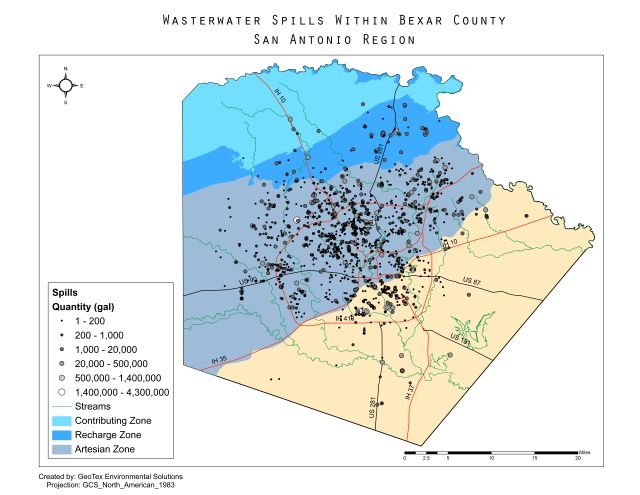