Menéndez failed to report $50,000 in donations

State Sen. José Menéndez acknowledged Wednesday that he failed to report a combined $50,000 in donations from two groups that are considered arch enemies at the state Capitol — the Texas Trial Lawyers Association and Texans for Lawsuit Reform.

The unreported contributions from the groups' political action committees to the San Antonio Democrat, each totaling $25,000, were discovered in an ongoing Texas Tribune investigation of contribution and expenditure filings at the Texas Ethics Commission.

Menéndez, who could face both civil and criminal fines for the disclosure failures, said he would quickly amend his campaign finance reports and accept any punishment regulators decide on.

“The ultimate responsibility is with me,” Menéndez told the Tribune. “I’m not going to be throwing anybody under the bus. I will comply with whatever they decide. If they decide there is a fine required or whatever, they’ll make their judgment and I will step up and take responsibility.”

Menéndez also said he was implementing new procedures to ensure that he doesn’t miss other contributions. He said the donation in 2015 from the lawsuit reform group, TLR PAC, was a wire transfer. The one in 2016 from the trial lawyer group, TTLA PAC, came via check.

“We take compliance very seriously, and we’re implementing new safeguards to make sure that nothing slips through,” Menéndez said.

The Tribune found the missing donations by comparing outgoing contributions from the two political action committees to the donations that candidates disclosed receiving from them in 2015 and 2016.. The two PACs reported making the cash donations, as the law requires, but Menéndez did not include them on his disclosure reports on file with the Texas Ethics Commission.

Elsewhere, the Tribune investigation found a $9,975 in-kind donation from TTLA to Sen. Carlos Uresti in 2016 that the San Antonio Democrat failed to disclose. Uresti said his campaign erred by lumping the in-kind donation — a poll of voters in his district — in with another TTLA donation used to buy advertising.

Uresti said Tuesday he had amended his report to reflect the missing contribution.

“We realized that was an oversight,” he said. “I’ll keep an eye out and try to make sure it doesn’t happen again.”

Without addressing any particular candidate or set of facts, Ian Steusloff, general counsel for the Texas Ethics Commission, said failing to report donations is a violation of state law.

“It’s against the law not to report something that’s legally required,” Stuesloff said.

Most enforcement action comes after a member of the public — including political opponents — file sworn complaints against a particular candidate. However, the commission may also act on its own. The commission can assess penalties of up to $5,000 per violation or three times the amount at issue, whichever is greater, Stuesloff said.

Officeholders can also face criminal penalties for campaign finance violations, ranging from a Class C to a Class A misdemeanor depending on the circumstances, but prosecutions by state attorneys are rare.

Craig McDonald, director of Texans for Public Justice, a liberal watchdog group that tracks the influence of money in state politics, said the large amount of money in question with the Menéndez donations, plus the high-profile nature of the groups giving it, will inevitably “raise suspicions that this was a thought-out attempt to hide the source of the money.”

During his bruising 2015 race against former Rep. Trey Martinez-Fischer, D-San Antonio, Menendez faced blowback from some Democrats for advertisements that TLR, a conservative group that has pushed for limits on civil lawsuits, ran on his behalf.

“This is a serious enough violation that the Ethics Commission should take action on its own,” McDonald said. “It needs to be investigated and prosecuted.”

Menéndez, who served 15 years in the House before running for Senate, said there was no intent to deceive the voters.

"Of the 20 years I’ve been in office and the thousands of contributions that have been processed, here are two examples" of an oversight, he said.

By Jay Root, The Texas Tribune

**Ryan Murphy contributed to this report

This article originally appeared in The Texas Tribune at https://www.texastribune.org/2017/02/15/menendez-failed-report-50000-donations/.

**Cover Image: Sen. Jose Menendez, D-San Antonio, reacts after his point of order to kill SB 4 the sanctuary city bill is denied during debate on Feb. 7, 2017. Photo by Bob Daemmrich for The Texas Tribune. 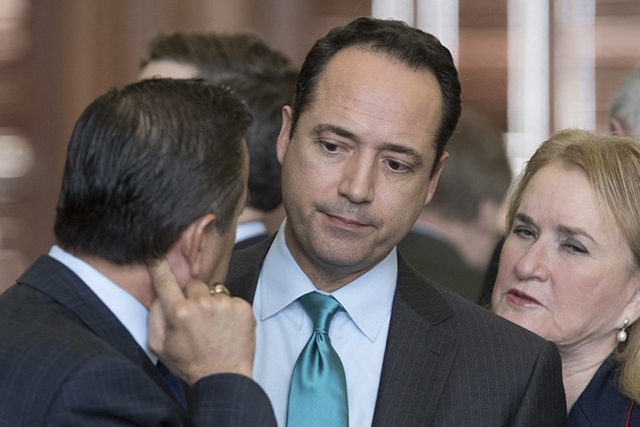