In 2013, meningitis occurred in about 16 million people worldwide, resulting in 303,000 deaths. Many survivors may come away from a bout with meningitis with permanent damage in one form or another.

Such was the case with Jamie Schanbaum. She was a University of Texas at Austin sophomore at the time, a few years ago. She was doing laundry at a friend’s place when she suddenly felt ill. Schanbaum was so ill that she hoped a nap there would make her feel better.

The nap turned into a full night’s attempt at sleep. But the symptoms worsened. Nausea, vomiting, severe headache, frequent visits to the bathroom, stiff muscles, even high sensitivity in her extremities.

Schanbaum managed to return to her apartment complex. But a debilitating pain arose. Each step, each move became increasingly difficult.

Eventually, Schanbaum touched base with her sister, who originally offered her a ride to class. Her sister saw how bad off she was and decided to drive her to the hospital. It took Schanbaum 20 minutes to walk to her sister’s car, covered in a blanket as she felt very cold.

"I didn’t even realize it’d be the last time I’d be walking on my legs,” she said during Immunize San Antonio’s biennial conference Oct. 12 at the TriPoint Center. You can see a video of Schanbaum's entire presentation, below.

A nurse at the hospital surmised Schanbaum might have meningitis, based on her appearance and behavior. She was put on dialysis, a ventilator, then into a medically-induced coma. The official diagnosis was Meningococcal meningitis.

"I woke up from time to time seeing my limbs go from red rash to purple to black to literally rotting,” she recalled. She lost her fingers, and her legs below the knees. Schanbaum wound up being hospitalized for seven months.

"Seven months, it changes your mental aspects,” she said.

When it came time for amputations, Schanbaum didn’t realize how painful they would be until they occurred.

“But being in the hospital and learning this could’ve been prevented is a whole other pill to take,” she continued.

Several years after that ordeal, Schanbaum shares her experience with meningitis. She and her mother, Patsy, formed The JAMIE (Joint Advocacy for Meningitis Information and Education) Group. The nonprofiit raises awareness of meningitis, its causes, and viable treatments.

The group also seeks to promote how vital immunizations are. Some forms of meningitis are preventable via immunization with meningococcal, mumps, pneumococcal, and Hib vaccines.

In 2009, the Texas Legislature passed the Jamie Schanbaum Act, which required students living in campus dorms to be vaccinated.

The new law, which took effect in early 2012, expanded the vaccination requirement to any new student under age 30 taking on-campus classes, including those living off-campus - just like in Schanbaum’s original case.

But there are complications. Some have opposed these and similar pro-vaccination bills, saying they are convinced vaccines carry more health risks than rewards and that such increasing state requirements impose on privacy. Others may express religious objections to all or certain vaccinations.

On a more practical note, there is concern that because the vaccine can cost $100 or more, many students may be unable to pay for it if they are uninsured or not on their parents’ insurance. So, educational institutions have resorted to offering exemption forms for students to sign.

"Who’s going to take responsibility for that child when and if, God forbid, something should happen to them?” said Patsy Schanbaum at the conference.

Patsy said it is inexplicable that some people rail against vaccinations. Celebrities such as Jenny McCarthy are noted in their opposition. But local leaders, such as Bexar County District Attorney Nico LaHood, have openly questioned the viability and safety of vaccinations.

"It’s just a tragedy they aren’t vaccinating their kids,” Patsy said. She added she has received criticism from anti-vaxxers who say she should not object her child to supposed risks. But Patsy says she replies that her daughter is disabled from a vaccine-preventable illness, and fears repercussions of anti-vaxxers’ actions.

Jamie talked about adjusting to a new normal after her ordeal. That includes returning to one of her pastimes, cycling. Jamie practically re-learned how to ride a bicycle. She succeeded and has won races.

That caught attention of fellow cyclists who were recruiting for the U.S. Paralympic cycling team. She found herself competing there in Guadalajara, Mexico, in the 2011 Parapan American Games. She won no medals, but many personal records were broken.

“To be part of that was astonishing. I never had dreams of being on the team, and here I was on the team,” Jamie said.

Jamie also developed severe arthritis, a result of the meningitis, and is due to get surgery for that. But she feels confident she can continue cycling right after that.

The JAMIE Group tries to spread its message, even though ride-share. Jamie had been a ride-share driver in Austin as late as 2015.

Many riders were students, and with passengers spotting Jamie’s hands and legs, invariably it comes up — “what happened to you?” From there, she tries to talk briefly about the importance of vaccination during the ride.

In 2012, renowned photographer Anne Geddes built a project, Protecting Our Tomorrows, showing through her work, how devastating a illness such as meningitis can be even for the survivors, mainly children from around the world.

Jamie was one of the survivors invited to take part. She represented the United States, and was the oldest participant.

“The photo was an opportunity for me to talk about it on a global level,” she added. “It shows that while it is scary, a lot of beautiful people survived and they live beautiful lives, and I’m really happy to be part of it.”

Jamie worked again with Geddes on a similar photo project over the summer of 2016, this time with Paralympians who have survived meningitis.

Jamie recently got involved in the Voices of Meningitis campaign. She shot a public service announcement with “Pretty Little Liars” star Lucy Hale, and toured with her, all to promote the importance of pre-teenagers and teens getting their appropriate vaccinations.

"We get our primary dose at age 11, and boosters at age 16, but only 30 percent who get the primary dose are getting the booster,” Jamie said.

Without the initial or booster vaccination, children and teens are at higher risk of getting meningococcal disease, experts say. According to data, sharing drinking glasses, eating utensils or water bottles, kissing, and living in close quarters are lifestyle factors thought to put healthy youngsters at greater risk of infection.

Jamie said organizations such as Immunize San Antonio and The Health Collaborative strengthen her resolve in advocating for vaccinations.

“Your work is full of gratification,” she told conference attendees. “Everyday we’re working for a healthier and better society.” 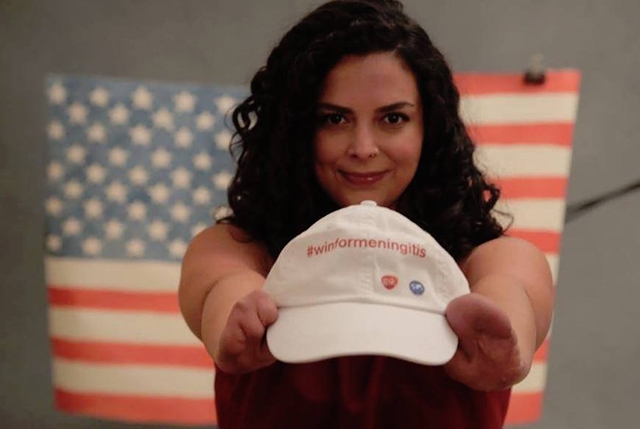