A little-noticed law signed last week by Gov. Greg Abbott mandates syphilis testing of pregnant women in the third trimester. The additional test helps prevent infants from being born with congenital syphilis and gives them a real chance at living syphilis-free.

Currently, only testing in the first trimester is required. Repeat testing toward the end of pregnancy is recommended by the Centers for Disease Control and Prevention in areas with high syphilis rates.

“This is so important, because half of San Antonio’s babies with congenital syphilis were born to women who had at least four prenatal care visits,” said Metro Health Medical Director Junda Woo. “Maybe mom contracted syphilis after she was tested in early pregnancy, or she was tested too late in pregnancy.”

Syphilis treatment should be completed at least 30 days before delivery. Metro Health recommends testing between 28 and 32 weeks’ gestation.

SB 1128 was authored by Sen. Judith Zaffirini (D-Laredo). "Rates of congenital syphilis are shockingly high in Texas, although it can be prevented through early detection and treatment," Senator Zaffirini said. "Testing for syphilis during the third trimester not only will reduce the risk of babies being born with serious complications, but also literally will save lives."

On a positive note, congenital syphilis cases in San Antonio declined from 17 in 2013, to 10 in 2014, thanks to robust efforts by Metro Health and its community partners. 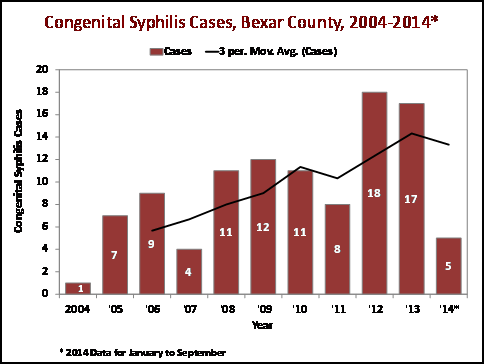 Shared by San Antonio Me…