A local nonprofit dedicated to mobilizing and educating young people has released its latest voter's guide.

A release party was held Sept. 13 at the group's downtown headquarters. MOVE S.A. was conceived as a modest idea from a few University of Texas at San Antonio students meeting at a coffee shop a few years ago.

The idea became a formal organization with a chapter at UTSA and at other local colleges and universities such as Northwest Vista, San Antonio and Trinity. The organization then became the non-profit MOVE San Antonio, which has grown into a modest yet impressive force for local grassroots political mobilization.

Entering the final stretch of this presidential campaign, the group is on track to having registered 10,000 voters in the San Antonio area. On National Register to Vote Day, Sept. 27, MOVE San Antonio hopes to register 2,000 people locally.

"I'm so encouraged by what this group is doing," said Chris Stewart, MOVE S.A. board chairman and chief of staff for District 8 City Councilman Ron Nirenberg.

The voter's guide is designed to be non-partisan, providing basic information and stances on candidates in select local, state and national contests. MOVE San Antonio works with The Bus Federation, a nationwide nonprofit that engages young voters.

The questions come with straightforward "yes" or "no" answers. The presidential election part also briefly lists some of the organizations that have endorsed this year's four major candidates.

MOVE San Antonio's staff and volunteers were instrumental in gathering data and responses from candidates, helping to ensure young people around San Antonio are informed and involved politically.

Aside from the presidential race, this year's local guide has basic information and responses to questions posed to frontrunner candidates in these contests: Congressional District 23, Texas House of Representative District 117, Texas State Senate District 19, and Bexar County sheriff.

The local guide may also include information about a ballot initiative or referenda, but not this year. MOVE S.A.'s guide is available in print and digital versions. Thousands of palm-sized hard copies are being distributed primarily at local colleges and universities, and at participating businesses. The digital version is available here.

Galloway said he hopes MOVE S.A. can begin to organize candidate forums and debates as early as the spring 2017 municipal election season.

The MOVE San Antonio office has had a special guest within the last week. Ari Berman, contributing writer for The Nation magazine, spent much time with staff as it put final touches on the 2016 voter's guide.

Berman is familiar with the nuances of modern American politics and the challenges of mobilizing voters. He wrote a best-selling, critically acclaimed book in 2015, "Give Us the Ballot: The Modern Struggle for Voting Rights in America." He also has long been a supporter of The Bus Federation.

Berman, at the release party, said he was impressed by what MOVE San Antonio has accomplished. But registering and engaging voters is an uphill battle in Texas.

"It's a massive undertaking. It's such a huge state. There are so many unregistered voters. It's so conservative politically," said Berman.

"For groups that are trying to mobilize younger voters, there is a lot of work they have to do. I've been impressed by how a group like MOVE goes into schools, tries to register voters, and scale up the number of people they register."

Berman said many unregistered voters are simply not active in politics and they are not inclined to get involved anytime soon.

Getting all those people registered is really a daunting undertaking. This is one way to chip away at it on the local level," he added, referring to MOVE San Antonio. 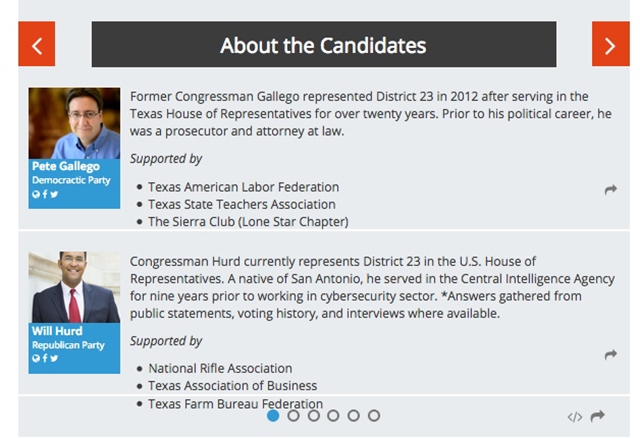