"Mufaro’s Beautiful Daughters," being showcased at the Tobin Center for the Performing Arts, will be brought to life on Oct. 3, for a one night only performance by the Dallas Children’s Theater while on their national tour.

The performance offers an intriguing tale originating in Zimbabwe, about two sisters and gives a storyline capturing a simplicity and beauty that captivates families and their children. Along with a vivid description there is also this deep acknowledgement of being cognizant of one’s cultural heritage regardless of the travails they or their ancestors were or are faced with or the eroding affect time has on memory.

This is an important dialogue author John Steptoe (born in Brooklyn, New York in 1950) began to open through his research for material to write the story. In his search for accuracy, he related aspects of African culture in one of many ways: all the characters’ names were derived from the Shona language and offer contextual clues to the story’s outcome, an aspect he incorporated as an educational point aimed at accuracy and cultural relevancy.

Steptoe adapted this nineteenth century Zimbabwean tale, to much critical acclaim, almost three decades ago-winning an Aldecott Honors for his adaptation. The didactic message is delivered in beautiful, aural, and visual terms by the Dallas Children’s Theater, this being their latest revival of the play since 2008-2009 and 2011-2012 tours in over 60 cities.

It is a tale of African village leader Mufaro, in Zimbabwe, and his two beautiful daughters, whom he is extremely proud of. The story also encompasses the plot of a powerful king seeking the worthiest of maidens throughout his land in order to choose the fairest of all these maidens to be his queen. It is a call Mufaro feels obligated and proud to answer; and yet it is a cautionary tale as well.

Within the story itself, as illustrated through this lauded piece of theater, directed by Robin Flatt, are several instances where both daughters show their true colors; one daughter behaving well when in the presence of her father, the other always in a state of humble, wholesome goodness despite what her sibling puts her through.

Nyasha represents the kind, loving, and giving daughter, while Manyara is selfish and without gratitude or respect for others. The contrast between both sisters is striking especially since the latter is jealous of the former, having hopes of becoming queen some day for the sole purpose of subjugating her sister and laying claim to all praise and love of her people.

The king himself offers the audience much to ponder; he is, in many ways omnipresent and somewhat omniscient.  He remains a creative power in progressing the story and his character is used with deft of purpose. The father is diametrically opposed to the king in that Manyara has proven cunning in her treachery to deceive him. In the end this proves to lend itself to a powerful moral of where deceit loses out and the best in humanity moves forward for the win.

Throughout, the director has proven true to the spirit of the author’s work. A fruitful collaboration has been borne of the labors of the other key components of this play: the musical direction, the actors themselves, the choreography, costumes and set-all this form a work that is at once accessible to a wide range of age groups, especially the young.

The genuine spirit of Steptoe’s work is truly brought to life through the Dallas Children’s Theater: the authenticity of the drums, the music, the direction offered to the actors in creation of a living history in unison with the set, and the costumes themselves all present an unforgettable experience.

Theater critic Nancy Churnin, of the Dallas Morning News states, “Director Robyn Flatt masterfully weaves the magical elements of a king who can change forms with the accessible story of siblings, a father and the far-reaching consequences of seemingly small, everyday life choices of kindnesses and cruelties.”

It is this integral dynamic that is developed for the audience in a final showdown of hope. While the message of kindness overcoming wickedness is a serious topic, the layering of light heartedness throughout this play makes it worthy of its reputation to enthrall audiences. The original music from several previous tours, the sound design and recorded accompaniment are brought to us by S. Ankh Rasa, a Dallas fixture and jazz man who’s worked with many an artist and as a musical director for the Dallas Children’s Theater.

Michelle Gibson adds to the authenticity via her various degrees of study, Hollins University and Tulane, concerning dance and the African diaspora. Her choreography along with Barbara Cox’s use of textile for the costumes has drawn much attention to this endeavor.

Many talented individuals bring us this production, and the Tobin Center for The Arts is up to the task of showcasing the brilliance of this proven work of performance art.  The show starts at 6:30 p.m. Oct. 3, in the Tobin Center H-E-B Performance Hall. Tickets are available through www.tobincenter.org. 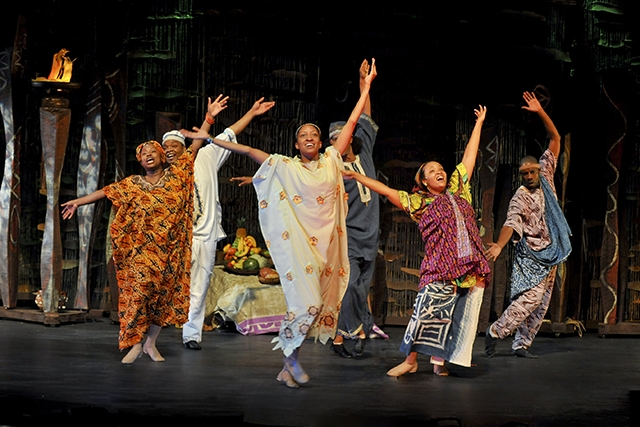