My first march in honor of Martin Luther King, Jr.

As I prepared to participate in the nation's largest memorial march in celebration of the legacy of Dr. Martin Luther King, Jr., I was immediately impressed by the seemingly endless sea of people waiting to march. It made me think of all the stories I had heard about the civil rights marches my own elder family members had been a part of.

I was anxious to get started, yet, wanted to soak up the energy I felt emanating from the crowd. I had always heard others speak of the march in reverent terms, without having the opportunity to experience it myself. This year would be different: I, along with my family, would walk the entire 3.1 miles with a 100,000 other San Antonio residents and visitors from all over the nation.

The nostalgia of the event was enhanced by the march being led by a fire engine from the 1960's, followed by a life-size replica of the bus on which Rosa Parks refused to give up her seat, sparking the year-long Montgomery Bus Boycott. Next, a sanitation truck symbolizing the Memphis Sanitation Workers strike of 1968 which brought Dr. King to Memphis. Finally, an all-black carriage with an ornate coffin, drawn by two solemn horses.

As I marched, mingling with people from all walks of life, I understood the full meaning of Dr. King's I Have a Dream speech. I saw people, not colors, walking together and enjoying the camaraderie. As the march was coming to an end, I made a mental note to plan to attend the march for many years to come. I feel a stronger connection to those who struggled for later generations to be able to enjoy the fruits of a quality education and a better life, and I will continue to instill the knowledge of the civil rights movement in my children.

Interviews from the 2013 March 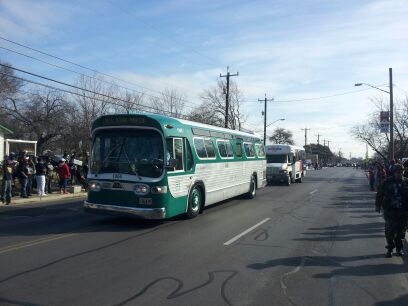