The NOWCastSA team collected photos and stories from participants in San Antonio's Martin Luther King March today. We will be posting a story and slideshows shortly

On Monday, Jan. 16, a diverse group of more than 200,000 people are expected to gather to celebrate the life of civil rights leader Martin Luther King Jr. The march is said to be one of the largest marches in the country and the city will welcome Dr. Martin Luther King's eldest son Martin Luther King, III and Ilyasah Shabazz, daughter of Malcolm X, as part of the celebration.

The Martin Luther King March is deep-rooted in San Antonio's tradition. Since 1987, the City of San Antonio’s volunteer MLK Commission has celebrated the life and legacy of Dr. King with an annual march and other events. This year for the 25th anniversary, San Antonio will honor his legacy through the theme: "Journey Beyond the March...Live Beyond the Dream..."

Editor's Note: Help us cover the march. Send your photos and videos to News@NOWCastSA.org or come see us immediately after the parade at TriPoint YMCA, 3233 North St. Mary's Street, and we'll download them for you. (Don't forget your cameras!)

"The 25th anniversary of the City of San Antonio's Martin Luther King, Jr. celebration is a major milestone for our community and a testament to San Antonio's rich cultural and historical legacy,” San Antonio Mayor Julián Castro said in a statement. “To have Martin Luther King, III and Ilyasah Shabazz celebrate this momentous anniversary by attending our city's celebration speaks to how important this commemoration of Dr. King's influence is - not just locally, but to the entire country.”

The 2.75-mile march will being at 10 a.m. on San Antonio’s East side at the Martin Luther King, Jr. Academy at 3500 MLK Drive and travel up Martin Luther King Drive, ending at Pittman-Sullivan Park at 1101 Iowa. See a map.

A commemorative program will follow and non-profit organization booths will sell food and refreshments. According to a city news release: 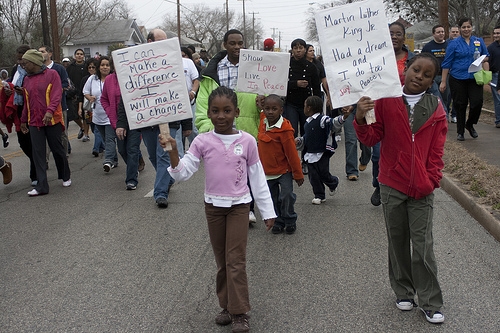