Need up, donations down for charities this holiday season

With mere days left until Christmas, some local nonprofits are grappling with less donations during their biggest push of the year.

The local Salvation Army has collected $12,000 less than what it had by this time last year for Angel Tree donations and the Red Kettle campaign is on track to fall short $20,000 compared to last year, said Danny Hermosillo, Salvation Army San Antonio Area Command Business Administrator.

See NOWCastSA’s interactive map of more than 300 locations to donate to local charities this holiday season.

The trend is similar nationwide and it’s been that way for the past few years. According to the Nonprofit Research Collaborative’s Late Fall 2011 Nonprofit Fundraising Study, 65 percent of charities surveyed reported an increase in demand for services, but only 41 percent saw an increase in fundraising results in the first nine months of 2011 compared to the year before. Those taking the biggest hit, according to the study, were smaller charities with less than $3 million in total expenditures--a group that makes up 90 percent of the country’s nonprofits.

Still, the nonprofits we spoke to are becoming more creative in their appeals, hopeful for the future and grateful for what they have now.

Hermosillo hopes that people consider the Salvation Army when making end-of-year tax-deductible donations. Elf Louise Christmas Project founder Louise Locker who started one of the city’s most recognized toy drives, said she tries to focus on the personal human stories instead of the numbers.

Locker said recently a 50-year-old woman posted a story on Facebook that said she had been on the receiving end of an Elf Louise delivery when she was 11. “Some of the children that Elf Louise gives gifts too have never had a Christmas,” Locker said.

“I like the spirit more than the numbers. What motivates me is one person and one story. That’s what motivates people too...your heart gets touched,” Locker said.

Others nonprofits rely on the same motivation.

“The trend has been that the weak economy has caused a lot of individuals to come here--layoffs, reduced hours, so everything we do is on faith and hard work. We try to be as creative as we can, working with farmers, ranchers, manufacturers, grocery stores, hotels, restaurants, caterers, businesses, food drives," Cooper said of the San Antonio Food Bank. "Everywhere there is food and an opportunity to get it donated, there is the food bank.”

But monetary donations go further than food donations, Cooper said, explaining that for every $1 donated to the food bank, $13 of food is purchased.

So far in this fiscal year, 22 million pounds of food has been collected. The goal is 50 million pounds by June 30. “It’s powerful to witness the miracle of giving. I see if everyday--a child that forgoes birthday presents for canned goods or a senior who donates winnings from Vegas or the company that donates leftover holiday meat items,” Cooper said. "We’re keeping the faith.” 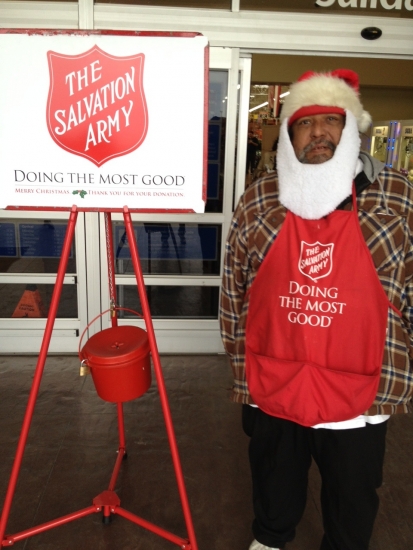