Sept. 27 Webcast: "A Community Conversation: Reno Achieved No Kill: San Antonio CAN too!"

NOWCastSA will record “A Community Conversation: Reno Achieved No Kill: San Antonio CAN, too!” Talk About It!/¡Vamos Hablarlo!, a bilingual multimedia and grassroots campaign focused on helping San Antonio achieve the Animal No Kill Initiative, is hosting the free public event on Tuesday, Sept. 27 at 6:00 p.m. to 8:30 p.m. at the Norris Conference Center at Wonderland of the Americas Mall. Due to technical difficulties with our livestream hosts outside of our control, we are unable to webcast the event live. We will post the video right here as soon as it is available.

This free event is open to the public, but seating will be limited. Register on the event website to reserve your seat. If you can't attend the event or would like to share it with others, send them to this website. The webcast will be live on the homepage and can be viewed later as well.

Achieving “No Kill” status means the City of San Antonio will not euthanize healthy, treatable or adoptable cats or dogs due to lack of shelter space or because their owner does not want them any longer, organizers say.
The Talk About It!/¡Vamos Hablarlo! Campaign is supported by the City of San Antonio, the San Antonio Area Foundation Animal No Kill Consortium of Partners, the Alamo Area Partners for Animal Welfare (AAPAW), and members and coalitions of animal welfare organizations.

All financial proceeds of the “Talk About It!” campaign will go to the San Antonio Area Foundation’s Animal No Kill Fund. Those funds will be distributed through a competitive grant application process to local animal welfare agencies that are working diligently to make San Antonio a No Kill community.

Brown is an executive director of the Nevada Humane Society in Reno, Nevada. In 2007, Bonney Brown increased adoption rates by 53 percent for dogs and 84 percent for cats and increased the save rate for dogs and cats county-wide by 50 percent. Pet adoptions have increased every year since.

Schneider, Manager of the Washoe County Regional Animal Services, began his career as a dog trainer and has served in a number of animal control leadership professions. He presents throughout the country about progressive approaches to animal control, including the International City/County Management Association’s National Alliance for Innovation Conference. 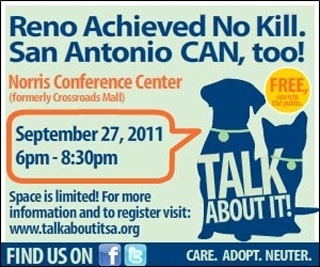