REPLAY THE VIDEO: NOWCastSA webcast a forum on a Citizens' Bill of rights and responsibilities developed by teams of students at University of Texas San Antonio.

The presentation is part of SA2020 and the UTSA College of Public Policy’s Great Cities Dialogue series, an effort that gathers leaders and policy makers for key San Antonio development discussions.

The two-hour event drew about 175 people in the Buena Vista Building Theater at UTSA Downtown Campus on Dec. 10.

You can replay the video here:

This video contains only the students' presentation. It is optimized for playing on mobile devices:

This video is of the complete event:

The Citizens' Bill -- a direct response to the SA2020 plan’s sections of government accountability and civic engagement -- includes 10 rights and 10 responsibilities that are the fruition of a real-world project for 30 UTSA social work students.

In less than two months, the student teams conducted town hall meetings, focus groups and surveys in public places, asking about 700 people from all over San Antonio two questions:

“We got some really thoughtful, compelling comments and results. I am pretty happy with the outcome,” Ambrosino said. “This is compatible with SA2020 and it’s not just a list of gripes. There are some things that the city can really do.”

Ambrosino said what makes this bill different is balancing citizens' needs and desires with obligations.

“Other municipalities have done this, but the responsibilities is a different twist . I’m glad we did it that way because it holds people on both sides accountable,” said Ambrosino.

The class’s presentation Saturday morning will be followed by a community leaders panel discussion.

Citizens' engagement  has been paramount in SA2020 since it began in september, 2010. See NOWCastSA’s in-depth coverage and videos of SA2020.

This will be the first SA2020 event under Darryl Byrd who in October was named the CEO of SA2020. 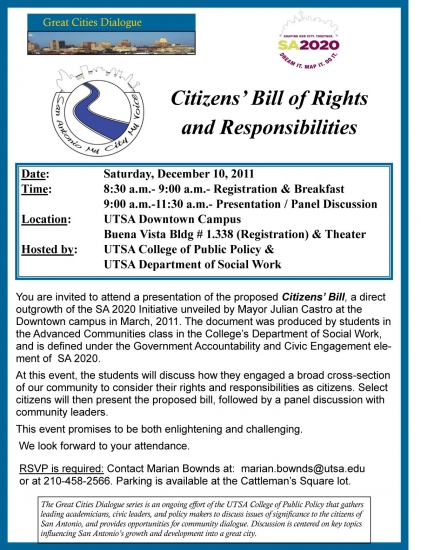