When Beacon Hill Area Neighborhood Association filed a routine appeal of the city’s zoning for a Stripes convenience store and gas station at Fredericksburg Road and Woodlawn Avenue, the developer's response shocked them.

Association members said the developer, GFR Development Services, sent emails threatening to file a lawsuit against them unless they dropped the appeal.

The Beacon Hill neighbors were simply following the city's written process for a development project in the planning stages. Members filed the appeal to the Board of Adjustment with a $600 fee, supported by donations from residents. But they dropped the appeal after being threatened with a lawsuit.

Frivolous suits like that are called SLAPP suits: Strategic Lawsuit Against Public Participation. (Click here for more on SLAPP suits)

The neighbors didn’t know that individuals and organizations are protected by one of the strongest anti-SLAPP laws in the country. Under the 2011 Texas Citizens Participation Act, SLAPP suits can be quickly tossed out of court and the victims of the suits can be granted fees and court costs. (For examples click here)

After hearing about the threat and the controversy at a recent Beacon Hill Area Neighborhood Association meeting (see full video below) State Rep. Diego Bernal of District 123 and State Sen. Jose Menendez of District 26 are stepping up to help educate neighborhood groups about their rights, hoping to keep them at the table and engaged in the democratic process.

The Beacon Hill Area Neighborhood Association is not unlike other inner city San Antonio neighborhoods, where residents worry how new development may affect their community's character.

A few years ago, members put months of work into creating a Beacon Hill Neighborhood Conservation District (NCD) (Click here for a PDF of the document) a zoning overlay designation that is used as a management tool to address the appropriateness of new and infill construction in residential and commercial neighborhoods.

Along Fredericksburg Road, the NCD calls for a pedestrian-friendly “streetscape,” with a sidewalk next to the street and the storefront structure set back no more than 25 feet from the street.

“Maintaining the street edge is the focus of the setback standards,” the Beacon Hill NCD says. “Avoiding the typical suburban condition of street, sidewalk, parking lot, building is the primary goal of the setback requirements.”

In this instance, city staff decided the canopy over the Stripes gas pumps was the “structure.” But residents said that interpretation didn’t follow the Beacon Hill NCD because pedestrians along Fredericksburg Road would have to walk from the sidewalk through the parking lot and gas pump area to get to the actual structure - the convenience store.

"We felt like the city made an error interpreting the canopy," Spielman told the crowd of about 60 people at the meeting.

"Stripes has a right to be there. They're a business. Even if some of us may have felt like something else should be there, they have the zoning to be there," Spielman said.

But the neighbors wanted the new development to conform with the community standards detailed in the Beacon Hill NCD, which is why they collected the $600 for the fee and filed the appeal with the Board of Adjustment.

"That's the reason we fight so hard for NCD standards. It's because the process comes from the community," Spielman said.

But they dropped the appeal after the threat, she said, because they were not prepared, financially or otherwise, to defend themselves from a lawsuit over the issue.

District 1 San Antonio City Councilman Roberto Treviño told the neighbors at the meeting that the association had a right to appeal the city’s interpretation, and he supports the neighborhood’s effort to preserve its character. But neither his office nor the city attorney’s office could directly intervene, he said. (link to his remarks in the video)

"It is a hard time to be in a downtown neighborhood, the tension is really strong right now because people are moving downtown. It's like we don't exist somehow," she added.

State Rep. Diego Bernal also attended the meeting and said he is worried that a lawsuit or even the threat of a suit could create “a chilling effect” for neighborhood organizations who are exercising their rights.

In response, Bernal and State Sen. Jose Menendez are publishing an educational flyer to let residents know about their protections under state law.

The Texas Citizens Participation Act “allows a judge to dismiss frivolous lawsuits filed against one who speaks out about a ‘matter of public concern’ within the first 60 days,” according to this article by First Amendment lawyer Laura Prather who led the coalition to get the statute passed.

San Antonio First Amendment attorney Alicia Wagner Calzada, who helped get the statute passed, a maintains this website on the Texas Citizens Participation Act that includes this list of Anti-SLAPP and First Amendment resources and contacts. 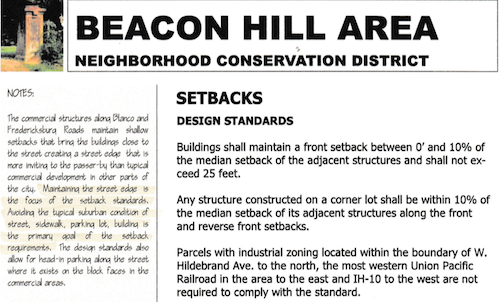