A new report written by groundwater hydrologist, George Rice, uses the state’s own Groundwater Availability Model to predict that the Vista Ridge water supply project would drop water levels and hydraulic (water) pressure hundreds of feet in the Simsboro and Carrizo aquifers.

The state’s model also predicts Vista Ridge pumping would reduce contributions of groundwater to streamflow in the Colorado and Brazos rivers as pumping increases. Unfortunately the state’s model is not well-suited to predict how much stream flows would drop making this a risk of unknown but potentially very significant proportions.

San Antonio’s Vista Ridge project, approved in October 2014 but subject to a 30-month due diligence and opt-out period, calls for pumping 50,000 acre-feet per year (AFY) of groundwater from the Simsboro and Carrizo aquifers from wells located in Burleson County, northeast of Austin, and delivered to the City of San Antonio via a 142-mile long pipeline.

San Antonio’s partner in the project, the Spanish construction company Abengoa and a Texas affiliate called “Blue Water Systems,” would construct the pipeline and pumping systems at a cost of about one billion dollars. If the deal closes, San Antonio Water System (SAWS) and SAWS ratepayers would be obligated to buy the water for thirty years, at an estimated cost of roughly $3.4 billion dollars over the life the project (not counting SAWS recent estimate of $240 million to integrate the water into their existing system).

Rice’s report looks at the modeled impacts of the proposed project on the Simsboro Aquifer, because this is the aquifer that will be most greatly affected by the project. More than 70% (36,000 AFY) of the Vista Ridge water will be mined from this aquifer. The report also informs that water from the Simsboro Aquifer naturally flows into the Carrizo, Hooper, Calvert Bluff, and Queen City aquifers. As a result, the impacts of Vista Ridge pumping will likely extend to these other aquifers as well.

The model predicts that the impacts of Vista Ridge pumping would be most severe on the Simsboro and the Carrizo aquifers and calculates a maximum drawdown of 466 feet and 217 feet, respectively, in the year 2060. The model predicts average drawdowns in the Simsboro aquifer from Vista Ridge pumping, when combined with baseline pumping, to reach 320 feet in the adjacent Lost Pines Groundwater Conservation District. The Lost Pines District regulatory “Desired Future Condition” (DFC) limit is 237 feet of drawdown. The model predicts average Simsboro drawdown in the Post Oak Savannah District from Vista Ridge, when combined with baseline pumping, to be 402 feet. This far exceeds the Post Oak Savannah DFC limit of 300 feet. See Table 3 in the report. 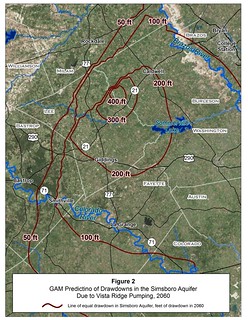 A map included in the report, shows that the predicted 400-foot drawdown line in the Simsboro would occur near the well field in Burleson and Lee counties. Neighboring Austin, Milam, Bastrop, Brazos, Colorado, Fayette, and Washington counties would also experience significant drawdowns due to Vista Ridge pumping.

It is important to note that Rice’s report points out that the modeling of drawdowns from Vista Ridge are based on a “total withdrawal scenario” of “baseline” or existing pumping plus the proposed Vista Ridge withdrawals. This is important because, as Rice notes, the modeled scenario does not include any future, proposed pumping projects from other private water sellers End Op and Forestar. Those companies are seeking the rights to pump an additional 91,000 AFY from the Carrizo-Wilcox Aquifer.

Rice’s report is consistent with information from the Texas Water Development Board Region L planning group regarding available groundwater in the Carrizo-Wilcox Aquifer. According to Region L’s Initially Prepared Plan, “the MAG-Limited (and recommended) size for the Vista Ridge Project is 19,442 ac ft/yr in 2020, growing to 34,894 ac ft/yr by 2070.” That is, the 50,000 acre feet per year that San Antonio proposes to obtain from the Vista Ridge project greatly exceeds the MAG, or Modeled Available Groundwater, which is an estimate of how much water is available from the aquifer before exceeding the Desired Future Conditions.

This study was commissioned by several groups concerned that the Vista Ridge project was approved without fully examining the consequences and considering all the information. Those groups are listed below. The results of Mr. Rice’s study suggest that the water source is not as prolific as has been represented, that ground and surface waters in the source region will suffer, and that the proposed pumping conflicts with existing regulations and groundwater management goals.

Save Our Springs Alliance 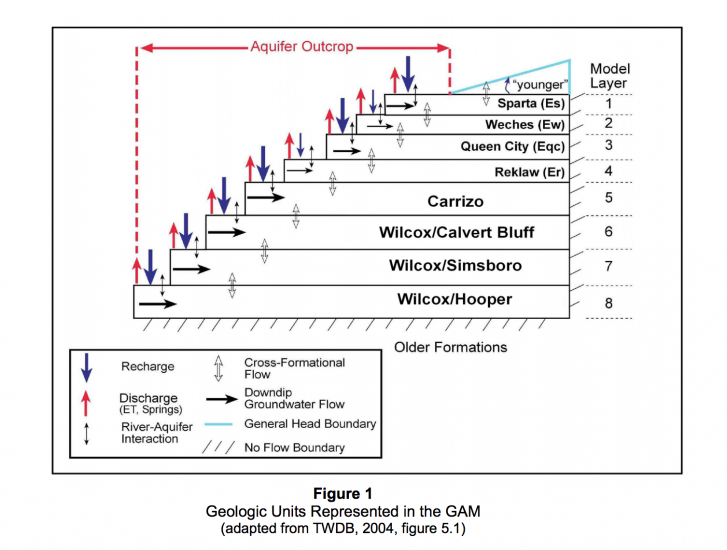