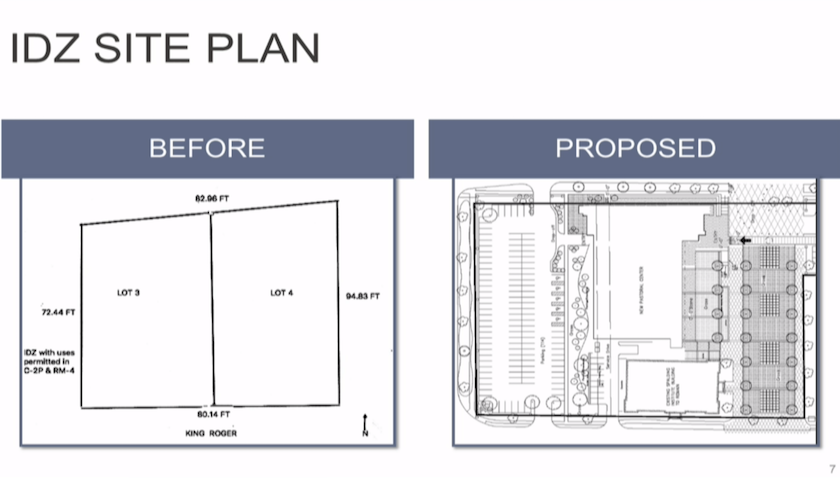 After more than a year of work by a task force, City Council approved changes to city code regarding infill development and zoning districts on Nov.15, helping temper neighborhood concerns about the prospect of out-of-character structures being built in older residential neighborhoods. (Watch complete video of the City Council meeting on this item.)

The new residential zoning districts, R-1 and R-2, apply to small lots and only allow single-family homes, townhouses, cottages, and garden homes to be built on them. It also requires various setbacks, parking spaces and caps maximum height at 3 stories or 35 feet.

Neighborhood associations lined up to speak in support of the new zoning districts, along with new zoning measures that require developers to submit more detailed site plans if they want a zoning change for so-called "infill development," or projects built on vacant or abandoned lots.

He said during his presentation to City Council that the idea behind the changes is to have more communication between developers, neighborhood leaders, city staff and City Council members. Previously, he said, IDZ was not always consistent in its application.

District 1 Councilman Roberto Treviño said during the meeting, “I think it helps to drive the fact that we have more choices, we have more options and, therefore, we have more opportunity to build compatible development and that's at the heart of this.”

The task force was convened in April 2017 at the behest of Treviño and then-District 7 Councilman Cris Medina.

Supporters of the new rules included the Tier One Neighborhood Coalition, which has been roundly critical of incompatible infill development in older neighborhoods.

Mark Spielman, of the Beacon Hill Neighborhood Association, said during the meeting, “It will allow for a lot more guidelines that will make this situation going forward a lot more viable.”

Also among those speaking in favor of the changes was Shawn Price, co-founder of West End Hope in Action. He said zoning has been historically discriminatory toward low-income people living paycheck to paycheck in the area. The R-1 and R-2 zoning will allow homeowners to make repairs and changes to their homes without having to go through the costly and time-consuming process of having their property to be rezoned. The costs to do so, he said, exceed $800.

Yaneth Flores, from the Esperanza Peace & Justice Center, told the City Council she supports R-1 and R-2 zoning because it returns “power to the countless families who find themself in lot sizes between 1,000 and 2,000 square feet.” She said she’s seen developers “prey” on neighborhoods and use the existing infill development zoning rules to create developments that are most profitable to themselves without regard to neighborhoods.

“We have seen these developers take advantage of our communities time and time again. They are destroying the very neighborhoods that make San Antonio San Antonio,” she said.

The vote on infill development comes after a tense exchange at a City Council meeting in October when Treviño moved to have MF-33 districts removed from neighborhoods in the city’s Future Land Use plan. During the meeting, other council members seemed confused about the timeline of additions to the Future Land Use plan, and Treviño’s motion failed in a 5-4 vote.

Within hours, however, Treviño brought up the issue again in a City Council Consideration Request, seeking a fresh look at the issue by the City Council Governance Committee.
(read more and watch video from the October City Council meeting here)

At the Governance Committee meeting Nov. 13, planning Department Director Bridgett White said Mayor Ron Nirenberg’s office staff convened a meeting about the districts last month, which involved planning department staff and representatives from District 1 and District 7. She said they focused on the potential height maximums of new developments and small parcels of land that are designated as MF-33. (Watch complete video of the Governance Committee meeting here.)

While the planning department held firm that MF-33 should stay as-is, staffers presented additional recommendations for the committee to consider, including adding MF-25 to neighborhood mixed-use land use, which would allow 25 units to be built per acre.The recommendations were unanimously approved by the committee, which includes Nirenberg.

During the Governance meeting, District 7 Councilwoman Ana E. Sandoval pressed the Planning Board staff about how they plan to keep members of the city council up to date about issues. (watch video of their exchange here.)

White said, “We actually have monthly meeting with the council offices throughout (the) SA Tomorrow process. So we update all the council staff where we are with the process, what decisions are being made, briefing them also on individual plans and the process of the plans.”

She said the meetings take place on the third Friday of every month.